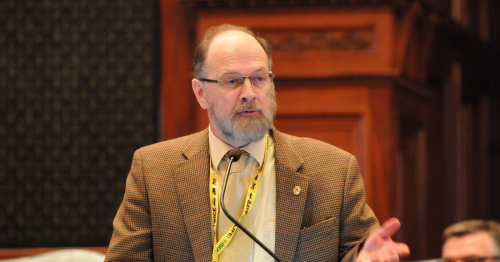 Does such a populist approach sound confusing and impractical? It may be the only way Illinois can pry the all-important legislative map-drawing process from purely partisan fingers.

Under the Fortner proposal, filed Tuesday as HJRCA 60, a commission would provide the necessary tools and data citizens can use to create district maps that meet Constitutional requirements. The commission would rank citizen maps based on a defined scoring rubric and present the top three ranked maps to the legislature for review and approval.

The five-term lawmaker has clearly put a lot of time and thought into the idea.

“By crowdsourcing the map creation process, everyone can submit ideas or improve upon earlier efforts,” explained Fortner.  “The commission would act as the referee to ensure maps align with provisions outlined in the Constitution.”

HJRCA 60 implements both structural and procedural changes that address concerns outlined by the Illinois Supreme Court in its recent 4-3 decision against another fair map proposal. It retains the current composition of the commission but changes its responsibility from drawing the map to ranking the maps provided by the public. Only the top three ranked maps would be considered by the General Assembly.

If adopted by the General Assembly the new map process would be applicable to redistricting beginning in 2021 and to the election of General Assembly members in 2022. More details about the proposal are available at http://www.mikefortner.org.

By Illinois ReviewIn a Facebook post on Tuesday, former...
Previous article
Sick leave will soon apply to care time for children, other family members
Next article
Why we don’t need a “deportation force”