Illinois not necessarily in the bag for Clinton 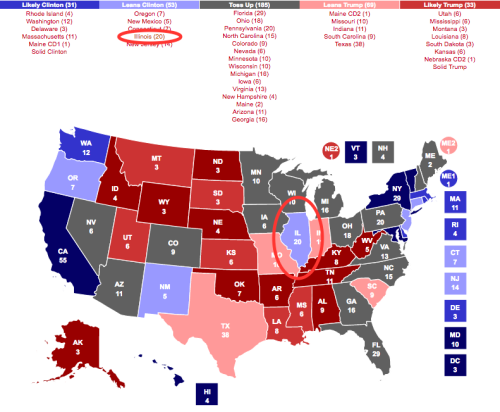 CHICAGO – Illinois, normally a very blue, Democrat-controlled state, is surprisingly not a sure thing for Democrat presidential hopeful Hillary Clinton, according to the nationally-renowned polling center Real Clear Politics.

Citing two recent polls of Illinois voters, Clinton is ahead of Trump by 13 points in one and by six points in another. That puts Illinois in Real Clear Politics' "Leans Hillary" column – a real surprise since neither Clinton nor Trump have invested much into the state and focused more on surrounding "battleground" states like Wisconsin, Michigan,Iowa and Ohio. Neighboring states of Missouri and Indiana are considered "Leans Trump" states.

Insiders tell Illinois Review that current polling shows the downstate third of Illinois heavily in favor of Trump, the central third evenly balanced between Clinton and Trump, and the top, most populated portion of the state going for Clinton. State campaigns are hoping Trump will have coattails in the southern third of the state that could put conservative Downstate Democrats in play.

Two Emerson College polls in the Midwest show Hillary Clinton leading Donald Trump by 7 points in Wisconsin (45% to 38%) and by 6 in Illinois (45% to 39%). Libertarian candidate Gary Johnson is winning 11% in Wisconsin, while the Green Party’s Jill Stein is capturing 2%, with 4% of Badger State voters still undecided. In Illinois, 6% of those surveyed plan to vote for Johnson, 3% say they support Stein, and 7% are undecided. The margin of error for both surveys was +/-3.6%.

In the Emerson Poll, Trump holds a commanding lead over Clinton (49% to 27%) with Independents, but 42% of the Kasich vote is going to Clinton while Trump receives 33%.

In the Illinois U.S. Senate race, Democratic Representative Tammy Duckworth has a 2-point lead over GOP incumbent Mark Kirk, 41% to 39%. Kirk has an image problem in the state, with only 26% of voters having a favorable opinion of him and 46% unfavorable (-20).  Forty percent (40%) view Duckworth unfavorably, and 37% view her favorably.