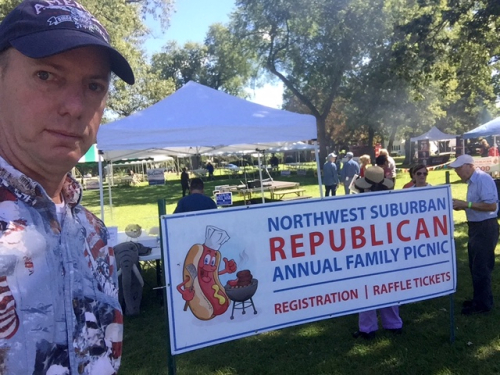 ELK GROVE VILLAGE – Republicans gathered to eat hamburgers, talk politics, and to support Donald Trump along with local candidates. Who ever said Republicans don't have fun?  Probably a Democrat. On Sunday, about 1000 folks showed up at Busse Woods in Elk Grove Village for the 36th annual Northwest Suburban Republican Family Picnic.

Later in the day, I attended the New Trier Republican Organization Annual Wine and Cheese held in a park in Winnetka. Congressman Bob Dold spoke, along with congressional candidate in the 9th, Joan Lasonde McCarthy and former Winnetka Village President Jessica Tucker. She is running for Illinois State Representative in the 18th House District. Support for Donald Trump is growing and was evident. Many establishment Republicans have had a hard time rallying around the candidate, but GOP grassroot support is strong and picking up steam. The hottest commodity at the picnic was Trump yard signs. Stephanie Holderfield, Illinois Trump campaign's field director, spoke for the candidate on the main stage. Trump will be in Bolingbrook, Illinois next Monday for a fundraising at $1000 per person. The event will be hosted by Bolingbrook Mayor Roger Claar and Ron Gidwitz  at the Bolingbrook Golf Club. For more information contact Dana Grigoroff at 312-659-5009 or [email protected].

The picnics were a huge success with lots of hope and optimism for Illinois Republican Victories. Election Day is Tuesday, November 8, 2016. Don't forget to vote.