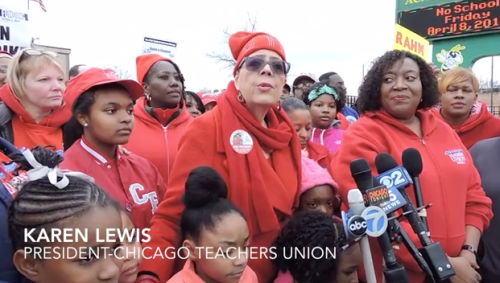 CHICAGO – After a year of negotiations that fizzled down to a strike threat that would have started Tuesday morning, the Chicago Teachers Union and the city came to a tentative agreement late Monday night that averted another strike. Schools are open and students are expected in class Tuesday morning.

“Clearly, we had some issues and there's some things we're going to still be working on. But what we found is that what we ended up with is something that's good for kids, is good for clinicians, is good for paraprofessionals, for teachers, for the community and we're very pleased that we were able to come to this tentative agreement,” CTU President Karen Lewis said after the agreement.

She boasted about the deal upon which Chicago teachers will need to vote and which funding Chicago taxpayers had yet to see for themselves, but which the union made available online HERE.

Lewis said "the contract includes a commitment from the school board on kindergarten through second grade class sizes and on teacher layoffs and recalls. The settlement also deals with the teacher pension pickup, long a hangup in contract talks," the Chicago Tribune reports.

State Rep. Jeanne Ives of Wheaton bristled Monday night at Karen Lewis' warning for Chicago Public School parents to "stay up a little longer" because the talks were nearing conclusion that appeared to be warding off the threatened strike.

"The arrogance of these unions! Read the Chicago Tribune headline again. Lewis telling parents to stay up a little longer to see if you need to make emergency plans for your children tomorrow if they strike. These people care nothing about those they purportedly serve," Ives  wrote on her Facebook page. "How's this for a final offer – if you don't like it, leave – and find a job in the private sector which has been struggling in Illinois."

Ives went on to remind readers that her attempt to allow taxpayers to review contract agreements before a local school board voted upon it still sits in the Illinois House Rules Committee – with a proverbial brick on it – placed by Speaker Madigan.

"And by the way, here is another problem – the taxpayers have no idea what is in the final agreement that they will have to pay for," Ives wrote on Facebook. "Contract transparency would go a long way in preventing these mid-night deals because they wouldn't happen under the bill I proposed calling for a two week public posting of the contract and one public hearing."

Under the proposed contract, CTU members hired before Dec. 31, 2016, will keep the pension pickup. “The new hires will not have it, but they will get at some point a salary adjustment,” Lewis said. “So it's about compensation.”