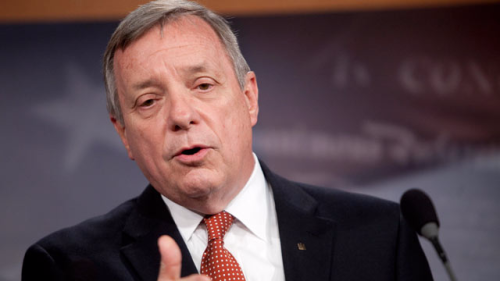 WASHINGTON – Illinois U.S. Senator Dick Durbin is one of several "Gang of Eight" senators that are plotting legislation for the new Congress to grant amnesty to those that say they were brought into the U.S. unlawfully as minors.

Pro-amnesty Sens. Durbin and Lindsey Graham (R-SC) are working on a bill to grant legal status to Deferred Action for Childhood Arrivals (DACA), President Obama’s executive amnesty program that was overturned by the U.S. Supreme Court.

“Sen. Graham and I discussed it again this morning and we hope to even have this bill ready before we leave next week, a bipartisan effort to say to the new president, ‘give these young people a fighting chance,’” Durbin said in The Hill last week.

Approximately 740,000 illegal aliens have received DACA since President Obama unilaterally implemented it in 2012, the Federation for American Immigration Reform reports.

“It expires. And what I would say is, if you have it, you’ll have it for the remainder of that period of time, but you will not be able to renew it,” Rubio said. “In the meantime, and it’s not a long period of time, but it does give us the time to do border security, modernization, and then move to something very reasonable for people like those who came here as children, or those who have been here for a long time who are not criminals to allow them to attain some legal status through a legal way, not an unconstitutional way, which is what DACA is.”

FAIR says the push for amnesty in the aftermath of the 2016 election shows how out of touch these senators are with the American people.

"Donald Trump made opposing illegal immigration a focal point of this platform throughout the campaign," the group says in a Nov 15thlegislative update. "This position clearly resonated with voters: a Pulse Opinion Research poll commissioned by the Center for Immigration Studies just ahead of the election found that voters overwhelmingly want our immigration laws enforced."

The poll found that 56 percent of likely voters supported “causing illegal aliens to return to their home countries by penalizing employers, getting cooperation from local law enforcement, and denying welfare benefits” and 54 percent believed that there has been “too little effort placed on enforcing our immigration laws."

Lastly, Sen. Graham’s claim that a DACA amnesty would “pass overwhelming” is not supported by fact. Indeed, Congress has repeatedly considered and rejected the DREAM Act. The DREAM Act was included in the “comprehensive” immigration reform bills that Congress refused to pass in 2006, 2007, and 2013. As a standalone measure, the bill has been equally unsuccessful.