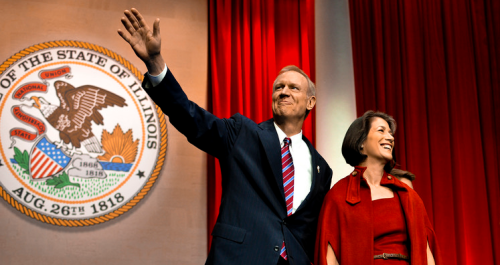 Seton Motley at Red State has written about the Illinois Exelon deal and compares it to what's happened in New York and New Jersey. Motley writes that what Exelon is doing in Illinois is also taking place in oh-so-Democrat New York: "The unelected (New York Public Service Commission) PSC will unilaterally raise taxes by $8 billion…(The tax) money will go to plant owner Exelon, a Chicago-based Fortune 100 company with annual revenues of over $34 billion."

Let us now turn to very-very-Democrat New Jersey: New Jersey Energy Leaders Look to New York’s Nuclear Subsidy: “Ralph Izzo, the chairman and CEO of PSEG, New Jersey’s largest utility which owns much of the nuclear generation in the state, laid out his vision in June for zero emission credits (ZECs) for nuclear power….Shortly after, New York announced it would give upstate reactors $1 billion in ZEC’s over two years to keep struggling upstate plants afloat.”

Get that? Zero emission credits – are government checks cut to the nuclear plants. Democrat New York is poised to cut them – and Democrat New Jersey wants to too. Here’s hoping New Jersey’s Republican governor, Chris Christie, kicks this cronyism to the curb.

But that’s it, right? Two’s the charm? Of course not. Let us now head to so-very-Democrat Illinois. Where we again encounter our old crony Exelon.

Major Illinois Energy Bill Advances with Two Days Left in Session: “Illinois’ sweeping energy bill may become law this week after an amended version was passed by a state House energy committee Tuesday. The bill keeps intact the…subsidy for Exelon’s two financially troubled nuclear plants, which is expected to cost ratepayers up to $235 million a year….The energy bill originated almost two years ago with Exelon’s demand for a subsidy for its plants….”

Crony Exelon asks – and the Democrat Illinois House delivers. And just like in New York, Exelon’s government-money largesse – comes out of the hides of everyday Illinoisans: “The BEST Coalition, a 501(c)(4) organization of companies and others that oppose the nuclear subsidy, released an analysis Monday estimating that the bill would cost Illinois ratepayers a total of $16.4 billion, including $5.3 billion for the nuclear subsidy….”

…Thankfully, Illinois has an ultimate out. A backstop similar to New Jersey’s – a Republican Governor. Behold Bruce Rauner. Should this House-passed nonsense pass the Senate – it will arrive on Governor Rauner’s desk.

Here’s hoping the good Governor takes a stand for his constituents, their wallets, and fiscal sanity – and vetoes this mess should it come before him.