OKLAHOMA – A Christian crisis pregnancy center in Oklahoma is responsible for publishing and distributing a sex education program that has area parents and taxpayers up in arms. 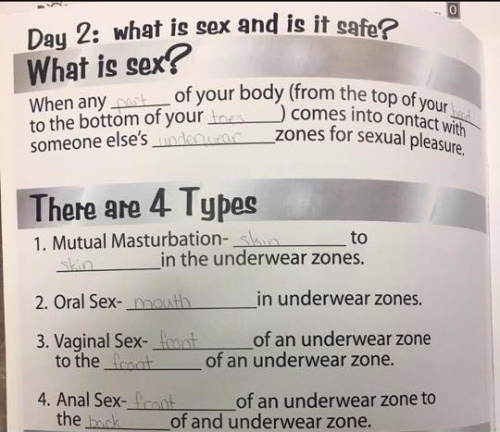 The photo above of the students' handbook was taken by the parent of a 7th grade student – and a public school teacher herself. She posted it on Facebook with these comments:

Like I said, Jake and I didn’t know. At least not until Wednesday, when our TWELVE year old daughter called (in tears) asking to be checked out. She had just spent her third day in this class, where boys and girls are combined, and male and female instructors take turns “teaching” our kids about sex education. Obviously sex education has taken a huge turn since I was in school. My daughter handed me a workbook that she was supposed to be bringing home each night so that parents can continue the conversation about what was discussed in class. She hadn’t done that….and in her shaky little voice, said “she was too embarrassed.” She begged me not to make her go back to this class. After opening the workbook, I understood why. I was appalled at what someone in our school system had deemed appropriate to talk to my child about. My TWELVE year old child (who still colors in coloring books). In a room where boys and girls are combined. With male instructors (or female, depending on the time of day, I guess) who are not teachers (or Nurses) in our school system.

Many in the Jay, Oklahoma community shared this parent's outrage. But the source of the curriculum poured fuel on the fire. It was a local "Christian" crisis pregnancy center.

“What has happened is a firestorm in that little community,” Linda Murphy, an education adviser to former Governor Frank Keating, told Big League Politics. “This came from a Christian crisis pregnancy center called Lighthouse Pregnancy [Resource] Center, and it passed through their hands into the public school system. The program is called 'Shape – Sexual Health Awareness Prevention and Education.' This is just way off the wall to the norm of most Oklahoma citizens’ thinking."