Should Rauner leave the GOP like Kasich is considering doing? 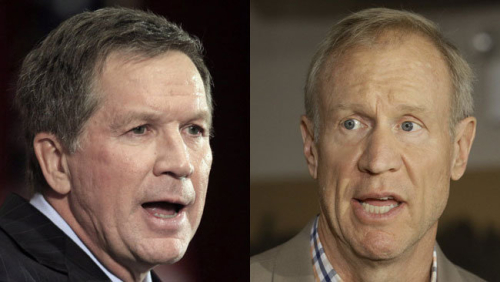 CHICAGO – Over the weekend, Ohio Governor John Kasich told a CNN reporter he's thinking about leaving the Republican Party – if it can't be fixed.

"If the party can't be fixed, Jake, then I'm not going to be able to support the party," Kasich told CNN's Jake Tapper. "Period. That's the end of it."

Maybe Governor Rauner should follow Governor Kasich's political lead. After all, the Governor has ignored the IL GOP 2016 Platform, which was overwhelmingly endorsed by the party faithful.

Governor Kasich and Illinois Governor Bruce Rauner are close kins politically. They each tend to be left of center on most issues, and both Kasich and Rauner have listened attentively to the same political consultants over the years.

Governor Rauner has yet to publicly approve of anything President Trump has done as president.

If the Governor wants to run for re-election in 2018, the best fit would be for him to run as an Independent with those that agree with his politics and his tactics.