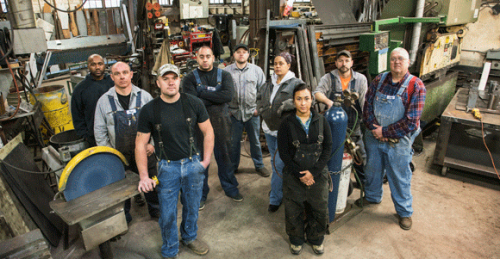 Cutting corporate taxes isn’t a handout to business; it’s a way of raising wages. Republicans have plan to cut the corporate tax rate from 35 percent to 20 percent. Adam Michel explains how this cut will raise worker’s wages:

“In an open economy where capital can move abroad and the prices of goods are set competitively in the world market, the corporate tax has only one place to shift: to workers. When capital moves abroad, the domestic capital-to-labor ratio declines, slowing productivity and lowering wages. The global after-tax return to capital is largely unchanged, but because workers are generally not internationally mobile, wages remain depressed in the country with the higher corporate tax and lower levels of investment.

“Businesses invest so that their employees can be more productive. More productive employees earn higher wages and produce more output, and businesses can hire additional workers as profit, investment, and demand increase. Because labor supply is constrained by relatively fixed variables like population size, an increase in capital investments allows wages to be bid up as labor becomes relatively scarce compared to the expanded capital stock. This is the basic logic of why higher capital-to-labor ratios (that is, more capital per worker) benefit workers. More concretely, the data suggest that an 8 percent increase in capital per worker would increase wages by 13 percent to 20 percent.

“Due to this dynamic, in the open-economy model where capital can escape high tax rates, labor bears the full burden of the corporate tax.” [Internal citations omitted.] [The Heritage Foundation]