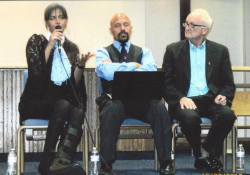 The Des Plaines chapter of Act for America held an event on Monday night, October 9, 2017, on the true nature of Islam at The Christian Liberty Academy in Arlington Heights, IL.

1) Phil Haney, a DHS whistle blower and former counter terrorism expert in President Obama's administration and also the author of the book, See Something Say Nothing.

2) Anni Cyrus, a survivor of Sharia law abuse after her parents sold her into marriage at age 14, where she was imprisoned, abused and escaped to America. She now advocates for women and girls suffering under Sharia law.

3) Usama Dakdok, an expert on Islam and author of an accurate, modern English translation of the Qur'an, Islam's holiest book, without any sugarcoating. Usama was born and raised in Egypt as a Christian.  His first language is Arabic.

Sara Schmidt introduced each guest as head of ACT Chapter in Des Plaines.

Anni Cyrus  is often heard as part of the Glazof Gang. It was surprising to see a tall, attractive young lady mount the stage to the podium.

Anni emphasized the important of educating ourselves as to what Sharia law stands for as set down in the Qur'an.  For without this understanding it is impossible to discern the problems we're facing.  Sharia law not only represents the government of Islamist countries, but it also applies to the religion practiced by Muslims.

Regarding Sharia Law here in America, how did happen?  According to Anni, those who obey Sharia law when they come to this country will always follow Sharia Law.  It doesn't matter where they are living. Twenty-five years ago, female mutilations were unheard off.  Now it is widespread among young girls in American Muslim neighborhoods.

Regarding the Koran, as related by Anni, it commands that men are fully in charge of women.  A woman can't do anything on her own, unless she obtains the signature of a male guardian.  If she strikes out on her own, such defiance can be punishable by stoning.  Even where women have been allowed to drive, a male guardian must give permission for a woman to do so.

Anni is very proud to be an American citizen.  She was fortunate to be smuggled out of the horrid situation she was in.  Anni spent three years in a refugee camp before coming to America.  Because Anni loves America, she now feels an urgency to stand up and talk, not for herself, but to educate others, so future generations of Americans might understand the threat Islam poses as its followers continue to grow in number.

Usama Dakdok had enough material at his disposal (322 slides) to speak for 6 hours, but even with the 20 minutes allotted him, Usama's presentation was quite shocking to those in attendance who had little or no knowledge about the tenants of the Islam.

Usama spoke passionately about the lies being taught about Islam in public school textbooks, wherein the Five Pillars of Islam is routinely taught to impressionable children.  As for Muslims, they are taught Seven Pillars of Islam.  What do the two missing pillars say?   And why is Islam alone being taught to children?  And what about Christian children who are subject to the Muslim indoctrination, such as those indicated below

4.      Mohammad was a peaceful, loving messenger.

About the danger of feeding false information to young children, Usama cited this quote by Joseph Goebbels: Tell a lie often enough, people will come to believe it.

In talking about the Qur'an, Usama noted that according to the Qur'an Muslims are permitted to lie.  Furthermore, the Qur'an itself does not call for peace; Islam denotes submission.  Western Muslims might speak of "peace" because they do not know what the Qur'an truly says, or they do not presently have "the upper hand."  Here is what The Generous Qur'an says in 47:35 about peace:

“So do not be weak and do not call for peace when you have the upper hand.  And Allah is with you, and he will not leave from you [for] your works.”

What about Mohammad as a prophet?   As Usama related:  A prophet must give prophesies to qualify as a prophet.  Furthermore, prophesies must then be fulfilled.  Mohammad, the founder of Islam, did neither.  What he managed to do was to lead his followers to the worship of Allah, where Allah deceives and leads Muslim astray.  To Muslims, all Christians in infidels.

Of great concern to Usama is how the American people are allowing the Muslimization of their country.  We know all we need to know.  Followers of Islam are here to establish Islamic sharia law in the U.S. as the law of the land.  In that Mohammad is defined as a prophet and Jesus as a prophet but not the Son of God in the public schools, should be of great concern to parents. Unfortunately, many parents aren't aware of the progressive education being taught their children, nor do many seem to care.

Usama's book, The Generous Qur'an,  https://www.amazon.com/Generous-Accurate-English-Translation-Holiest/dp/098241370X published in 2009, is a must read for those wish to know the truth about Islam from its original source of corruption and hate to increase awareness of the looming threat posed by Muslim beliefs set forth in the kareen (generous) Qur'an.  Usama's book is a true and accurate English translation of the (generous) Qur'an.  After the September 11, 2001 attack, Usama's book was dedicated to the families and loved ones of those whose lives were taken.

Following are excerpts from Usama's translation of The Generous Qur'an:

Those who die for the sake of Allah (performing jihad – holy war) are not dead, and Allah will pray over them.

It is permissible to lie in an oath.

In the gardens men will have multiple wives of stainless purity (even-virgin).

Muslims who make friends with unbelievers lose their salvation, but Muslims can make temporary friendships with infidels only when the Muslims are weak until they have the upper hand.

Men are superior to women.  Men must scourge their wives before they become rebellious.

Muslims are commanded to kill the Jews and Christians.

Allah will give Islam victory over all other religions.

Those who reject the Qur'an are infidels.

Allah promises to exalt Islam above all religions.  Islam is a religion of love and peace EXCEPT to anyone who is not Muslim

The final speaker, Phil Haney, spoke from his own experience as a Homeland Security Officer during the Obama administration, who suffered repercussions (a criminal investigation) when he exposed the government's submission to Jihad funding in the Obama administration.  He did all he could within his powers to protect America from the internal and external threats from Jihad.  While in his position, Haney gleamed information from internal documents that not only told of the subversive influence in the Obama White House, but just how radical the administration itself had become in trying to defend Muslim supremacists.

Haney's oath to support and defend the Constitution of the United States against all enemies foreign and domestic, "so help me God," compelled Haney to become a whistle blower. Now retired his Haney's oath still requires Haney to speak out about the internal and external threats from Jihad.  Haney is further resolved to continue his mission until the end. Following the policy known as Countering Violent Extremism (CVEO) in the Obama administration, orders were issued to sanitize or eliminate all information Haney had gathered.  An investigation was also launched against him.

Haney's book, co-authored by Art Moore, See Something Say Nothing, is a chronicle of Phil Honey's experience as front-line officer, intelligence expert, and founding member of the DHS. It demands to be read.

Islamist groups have partnered with such groups as Black Lives Matter and Antifa.  All want a Constitution that is more acceptable to them.  This is why Thorner is so against. Con Con (Constitution of the States).  George Soros and the Koch Brother are financing those who are being sent to state legislatures to convince legislators that Con Con is the way to go

·        The swamp cannot be waterproofed, because the Islamists are part of the swamp entrenched in government positions.

·        When will enough be enough? When enough people believe that our Constitution is not worth defending. This nation will then fail.

·        Muslims are in the deep state and a threat within our internal government.  These swamp creatures have stingers and very sharp teeth.