Di Leo: A House Divided… and a President’s Tweets 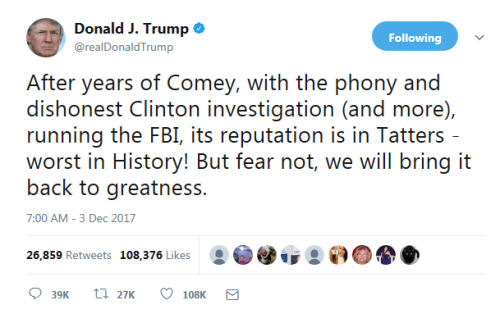 On December 3, President Trump issued an interesting tweet… not terribly unusual for him, as that’s how he communicates with the American people.

Just as Ronald Reagan was famous for “going over the heads of the press and speaking directly to the people,” Donald Trump uses today’s technology to accomplish the same end. As a result, he is better able to command the political narrative than most Republican presidents (Democrats don’t need to find such methods, since the press has long acted as Democrat presidents’ house organ).

In this particular tweet, President Trump said that the FBI’s “reputation is in tatters”… and all Hell broke loose.

The week began with a chorus of politicians attacking the concept of a president making such charges against a cabinet department or federal agency, on the grounds that it’s unseemly, and that it’s never been done. Past presidents, after all, haven’t acted this way.

But let’s analyze that fact. Yes, past presidents haven’t acted this way, but maybe… just maybe… that’s what put us in the condition we’re in today.

The federal government has grown by leaps and bounds since the passage of the 17th Amendment in 1913, which removed the key brake on federal expansion.  For the past century, we have watched from a distance as the city of Washington, D.C. has grown and grown, creating new agencies and bureaus and administrations, building new office buildings to fill, hiring new permanent employees who can never be fired because they’re “civil servants.”

From the very dawn of the Republic, presidents have operated under the theory that the administration is “theirs” from Inauguration Day until they leave office. They may assault their predecessors’ administrations’ policies, but never their own, because after all, it’s “theirs” now.

But it’s not that way anymore. With an ever growing and legally protected (“Hatched”) civil service, the administration is more and more independent of the elected officials and their appointees at the top.  What Americans today refer to with disdain as “the swamp” is this sea of permanent bureaucrats, appointed by past administrations and held over forever since, operating almost completely independently of the will of the voters.

We may elect a Bush, a Clinton, another Bush, an Obama, and now a Trump, but these civil servants are independent of those elections.

Our system is designed to protect civil service from risk of firing due to political changing of the guard. The Hatch Act of 1939 was certainly well-intentioned (or at least, it appeared to be), in protecting employees from being replaced by a new group of party hacks, operating on a “to the victor go the spoils” theory.

Our media, academe, and political class have all joined forces in advocating this concept. They present the idea that an attack on the federal bureaucracy, particularly on specific agencies, is somehow un-American at its core.  “These are noble civil servants! They’re your people now, you should support them!”

If we didn’t know better, we’d say this was a brilliant tactic. Consider: who applies for jobs in the administration?  People who believe in government, who prefer public sector work to private sector work.  These are people – for the most part – for whom statism comes naturally.

The Hatch Act changes that. Now only the top tier – the secretaries and undersecretaries, and the special assistants too – gets changed from election to election.  And the ever-growing sea of bureaucrats below them are not only almost purely statist in their philosophy, they are also protected from political changes.  So even when a Ronald Reagan or Donald Trump wins the rare election, the bureaucratic state rolls along happily, independent of the choice the American electorate made in the last national election.  “Oh, new regulations won’t come along as fast as usual… but it’s not like  the old ones are going away…”

This is what happened in the 1980s. Ronald Reagan opposed the bureaucratic state; he declared “Personnel is Policy!” and hired the best conservatives he could to lead the administration.  And he was a very successful president in several important ways, but not in this one.  He got rolled over by the bureaucratic state.

Donald Trump began his administration with the intention of learning from that mistake, and finding some way to win where Ronald Reagan lost. This is a special challenge, because Mr. Trump lacks many of Mr. Reagan’s skills.  But what he does have going for him is these past thirty years of history.  President Trump can see that Reagan only slowed the pace of growth; his methods failed to roll it back.  So Mr. Trump sees the need to try something else.

Mr. Trump began his administration with an order to actually roll back existing regulations. If he can’t fire civil servants because they’re Hatched, he can give them less to do.  Maybe even MUCH less.  There’s no doubt that this is infuriating those who are having their power taken away, but there’s not much they can do about it… other than to try to get political (which the Hatch Act largely forbade, remember), and trying to bring an early end to this administration.

Let’s look at the Department of Justice, for a start. The DoJ runs dozens of agencies, many worthwhile, many not.  Many of its agencies are utterly destructive, as currently constituted.  Attorney General Jeff Sessions has his hands full, as he tries to prioritize the efforts to shrink and turn around the various rogue bureaus within his department.

The vast majority of federal agencies, of course, are made up of good people, honorable and well-intentioned people who want the best for the American people… as they see it.

But they are still statists, by definition. These Hatched employees are people who believe that government involvement, government supervision, government administration of the private sector, is in some way good, helpful, even necessary.  And sometimes it certainly is… but not very often.

So these employees are not destructive people, exactly… if they were employed in the private sector, they might be wonderful, helpful, productive folks… but as government employees with power in their hands, they are destructive.  And President Trump’s job, as he rightly sees it, is to minimize the power of these bureaucrats to do further damage to our country.

So he appoints people – which past presidents have done, to little avail.

And he issues executive orders – which past presidents have done, to little avail.

And he gives speeches – which past presidents have done, to little avail.

He knows he needs to do something else, if he is to turn America back into a nation that recognizes the limitless opportunity enabled only by limited government.

So he is using his twitter account – in part – to try to get the American people on his side on this critical issue. He pulls no punches; he tweets that there are rogue agencies, and that rogue employees within those agencies are working to undo the results of a legitimate election.  He says this to control the narrative, to beat the mainstream media at their own game, to enlist public support for the cause of shrinking and defanging a leviathan that long ago outgrew its bonds.

This week, we saw pundits – including Republicans as well as Democrats – lining up in defense of the FBI, saying that the president shouldn’t be speaking against “his” FBI this way… and we can see that they would take the same approach no matter which federal agency was under discussion.

The Hatch Act planted a fiction in the minds of the American public, that the bureaucrats in Washington are non-political, and are in some majestic way “above politics” and thus above reproach.

Nothing could be further from the truth.

It’s refreshing to finally have a president who sees that truth, acknowledges it, and works to expose it.

Ronald Reagan used to say that the ten scariest words in the English language were “I’m from the government and I’m here to help you.”

Donald Trump is working to reduce the damage that those bureaucrats can do when they say those ten words, and his tweets are helping to spread the message.

“Indecorous” or not… unexpected or not… the first step in solving any problem is admitting reality. Donald Trump is doing so, and with his little smartphone, he’s helping the public do so as well.