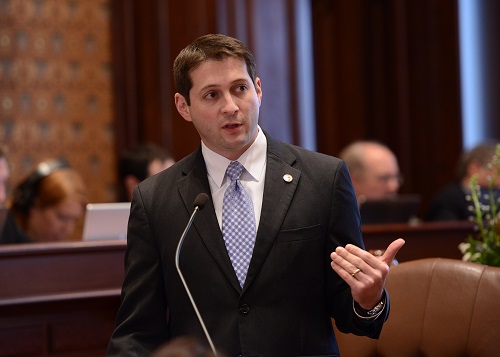 The Republican minority in the Illinois Senate is heavily outnumbered by Democrats that are expected to push for Illinois to join Alaska, California, Colorado, Maine, Massachusetts, Nevada, Oregon, and the state of Washington in defying federal law and legalizing marijuana.

“Around the country, we’ve seen the public’s views on cannabis use change dramatically in a short amount of time.  It wasn’t that long ago that cannabis was far more taboo than it is considered today," Barickman said.

He said he expects to see legislation to legalize marijuana advanced in the Illinois legislature as early as next spring.

"I am willing to support legalization for adult use if it is done correctly, which includes negotiating appropriate safeguards.  While I acknowledge that cannabis use is largely a personal choice, I am particularly interested in appropriate safeguards for minors and for others who may be placed in danger from an individual’s use," Barickman's statement said.

"We do this already in the context of regulating alcohol and tobacco, as well as by imposing different standards and laws on minors.  These are good starting points for the reasonable regulation of legalized cannabis for adult use.”

"First, laws restricting cannabis result in an inefficient use of taxpayer’s money. Lawmakers in any fiscal climate, and especially in Illinois, must be prudent in how we prioritize our spending.  Money spent on this fight isn’t working, and those dollars could be going elsewhere," he said.

"Second, prohibition has created enormous economic incentives for drug cartels and others. Rather than continuing to enable these bad actors, Illinois should tax and regulate this economy, and begin to capture the significant revenues now controlled by the black market.

"Third, Illinoisans supporting individual liberties, a broadened tax base and opportunities to provide middle class tax relief must have a seat at the table during these negotiations. Undoubtedly, legalization will result in significant revenue to the State of Illinois," Barickman said. "New revenues should be prioritized to pay down state debt and provide tax relief.  We should also consider investments in our local mental health and addiction treatment services, and towards the opioid epidemic.”

He went on to say that regardless of how individuals may feel about cannabis usage, the state can’t sit on the sidelines while others work out the details.

"Therefore I plan to work with my colleagues to develop a legalization plan that adopts reasonable safeguards and embraces fiscal reforms,” Barickman said.

Barickman, 42, chose to announced his position on the issue days after the deadline for petitions to be on the March 2018 GOP primary. Barickman is running for re-election in 2018 unopposed in the GOP primary.