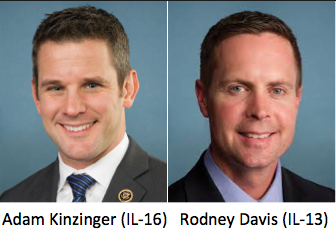 "We write in support of passing a permanent legislative solution for Deferred Action for Childhood Arrivals (DACA) recipients before the end of the year. DACA recipients – young people brought to America through no fault of their own – are contributing members of our communities and our economy," the letter says. "For many, this is the only country they have ever known. They are American in every way except their immigration status."

As a result of their support for DACA amnesty, the legal immigration group ALIPAC has now added Davis and Kinzinger's names to what the group is calling "Kate's List (View)." ALIPAC is calling for GOP primary challengers to run against these lawmakers because they can now be defeated in their 2018 primaries.

"This DACA legislation scheme is not what people voted for in 2016! These 34 Republican lawmakers have put Amnesty and illegal immigrants ahead of their responsibility to protect American citizens like Kate Steinle and the thousands of others being harmed by illegals each year," declared William Gheen, President of ALIPAC. "These out of touch members of Congress are underestimating the magnitude of the backlash against their DACA Amnesty plans."

At the same time, Republicans in the U.S. House and Senate stripped language out of the tax reform bill and protected illegal aliens siphoning billions of dollars out of the U.S. treasury through tax credits, the group said in a press release.

ALIPAC says American voters are incensed that after the surprising election of Donald Trump, the main focus in Washington, DC, is helping, accommodating, incentivizing, and facilitating illegal immigrants and illegal immigration instead of putting Americans first.