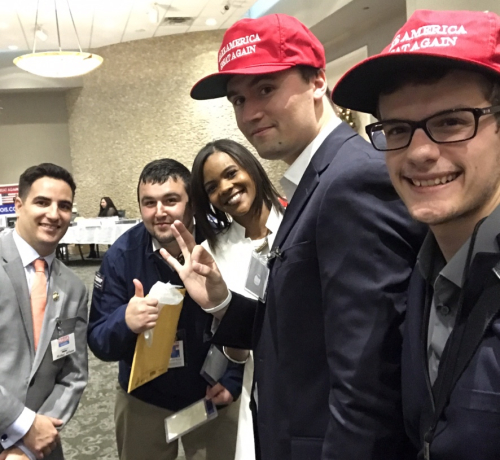 The November 21st MAGA rally opened with prayer, the National Anthem sung by Raquel Mitchell of the Frederick Douglass Foundation of Illinois (The Largest Christ-Centered, Multi-Ethnic and Republican Ministry in America), the Pledge, and a Moment of Silence for fallen Rockford police officer. Police Officer Jaimie Cox was killed during a traffic stop at age 30, on Sunday, November 5, 2017. He had served with the Rockford Police Department for one year and had previously served with the Illinois Department of Natural Resources – Division of Law Enforcement. He was a veteran of the U.S. Army National Guard, serving from 2004 to 2010. He was part of an Army National Guard contingent deployed from 2008 to 2009 to Nangarhar province in Afghanistan and received honors including the Army Commendation Medal, the Army Achievement Medal and the Combat Infantryman Badge. He was also awarded the Illinois National Guard Abraham Lincoln Medal of Freedom Ribbon. It was noted how the coming holiday season will be a very difficult for his family.  Link

It was now time for special host of the evening, Joe Walsh, a former Illinois U.S. congressman and host of the weekday Joe Walsh Show on AM 560, to step forward to receive the enthusiastic welcome extended by those in the room, many of whom are faithful listeners to the Joe Walsh Show. Raquel Mitchell of the Frederick Douglass Foundation introduced Walsh.

Joe Walsh described his job of the night as firing up those who are in the battle. Joe then expressed disappointment that there weren't 1,000 people in attendance at the rally.  Joe bemoaned that conservative  Americans are not fired up, with good reason not to feel enthusiastic, as Republican U.S. legislators are not following through on Trump's campaign promises.  "But we better get fired up," said Walsh, "as the other side is raging with uncontrollable anger. Walsh then asked how it felt when Barack Obama was elected?  Now the other side is fired up in much the same way as we were over Obama's election.  Democrats never expected Trump to win, but Hillary is gone, and Democrats are now "running through the wall" to come out and vote. Next up was Ed Martin, President of Phyllis Schlafly American Eagles and Education Fund which, in part, sponsored the MAGA Illinois 2017 event.

Ed spoke about Phyllis' meeting with candidate Donald Trump.  Knowing that Trump was a formidable deal maker.  Phyllis Schlafly told Trump that before she could endorse him, he must help her make the Republican Platform in a few months a conservative one, putting country first, family first, and with a pro-life agenda.  Phyllis got everything she asked of Trump. This resulted in the Republican Platform at last summer's Republican Convention in Cleveland, Ohio, the most conservative ever adopted.

Trump also promised Phyllis that he would never let her down. Phyllis believed that politics was where the action was to effect change. When Trump won the presidency in November of last year, in what Ed called a "God-given miracle", Trump followed through with the appointment of Neil Gorsuch, thereby fulfilling his promise to appoint a replacement for Scalia that that was in his same image.

If Republicans lose big in 2018, we will lose the keys, not only to take back America, but to make America great again.  Phyllis Schlafly Speaks on Donald Trump, Vol. 2, was available for participants free of charge, courtesy of Phyllis Schlafly American Eagles and Education Fund.  Jordan Henry, Director of Research at Phyllis Schlafly Eagles, was eager to engage in conversation with Expo attendees about Phyllis Schlafy, as they visited his Expo table for free books.

A  young and dynamic  speaker was next heard from, Jack Posobiec, who was a political operative in the 2016 Presidential Elections. In that Mr. Posobiec still lives in the Washington swamp, it feels to Jack that Nancy Pelosi and Chuck Schumer are still in charge.  In that Paul Ryan and Mich O'Connell couldn't get Obamacare passed, Jack further suggested that both should have stepped down because of their ineffectiveness.  Posobiec observed how something has shifted drastically in this nation when "Making American Great" is now considered a racist term.  From day one in office, many in Congress, the Left, and the media have had nothing good to say about President Trump.  As Posobiec remarked, "Congress is more worried about the KGB hiding behind every tree than working for the good of the American people."

In introducing Charlie Kirk, Founder and President of Turning Point USA, Joe Walsh said 24-year-old KIrk is one of the most important speakers in our country today. In only five years, Charlie built the largest youth group in this nation to promote conservative ideas with 1,250 chapters located on high school and college campuses, and the movement continues to grow.

Charlie Kirk turned his speaking time over to Candace Owens who is with Kirk's Turning Point. Her blog is "Red Pill Black."  Without hesitation, Ms. Owens announced that by the end of 2018 she was going to "lead the Black revolution against the Democratic Party."  Candace then commented how Blacks have an unfavorable reputation in the media, that they hate white people, and that they just want free stuff.  "Not so," said Candace.  In bringing up the name Turning Point U.S.A. to Charlie Kirk, Candace asked of Kirk, "whose point was being turned?"   Thereafter, Candace requested that Charlie put her on the ground to speak to her own people.  As Candace remarked: "Some Blacks don't even know they are conservative."

Rick Manning, from American for Limited Government, offered comments that were well received, first relating how The Paris Climate Agreement was an attempt to export American wealth to other countries.  In spite of intense lobbying efforts to convince the U.S. to stay on board, Trump realized the agreement would only hurt the economic engine of the United States in limiting our electricity generating capacity.  As Manning remarked, The Paris Accords was all about reducing global warming through the reduction of CO2 emissions, which would have required the curtailment of fossil fuels (We do have 300 years of  coal sitting in the ground.) in favor on green sources of energy.  Mr. Manning further stated, "People will respect America when we are the wealthiest and the strongest nation."  Manning, in an unspoken reference to Trump, spoke of how great men arise at times when God needs them.  Manning emphasized that Republicans will be unable to survive another election cycle if they tell themselves that voting is not worth their time, for the Democrats are motivated come out and vote.

In what was a play on the comedy team of Diamond and Silk, Raquel Mitchell and Babette Holder, President of the Illinois Chapter of the Frederick Douglass Foundation, presented their version of the Diamond and Silk comedy team of  Lynnette Hardaway and Rochelle Richardson, who are better known by their stage names Diamond and Silk.  They became active American video bloggers and YouTube personalities as black women in support of Trump during the Trump campaign.

The last two rally speakers were patriots who are running to unseat Republican Party incumbents.  Even though the MAGA event was geared toward targeting state and federal elected officials in Illinois who are not supportive of the Trump agenda, Wisconsin Congressional candidate Paul Nehlen, who is running to defeat RINO speaker of the House Paul Ryan, was a welcome addition to the rally.  Nehlen criticized Ryan for not being a conservative voice and thought the time had come for Ryan to return home.  Furthermore, Ryan is not fighting for Trump's agenda.  Big business continues to love Ryan because of his handouts.  On immigration, Ryan doesn't favor building a wall, and he's perfectly fine with DACA individuals obtaining citizenship.  This would enable millions of DACA relatives to enter this nation through chain migration.

Illinois Congressional candidate James Marter seems up to the challenge to defeat incumbent 16th District Congressman Adam Kinzinger, who has been a big disappointment in his failure to support President Trump in the U.S. House. Marter wants to cut spending in D.C. and drain the swamp. He also believes in limited spending and is a strong advocate of 2nd Amendment rights.  Marter was well received. Many rally attendees were from Kinzinger's 16th Congressional District.

Joe Walsh expressed how awesome it was that so many came to attend the MAGA rally, even though attendance was far short of the hoped for 1,000 strong. Joe then warned that we are in for a fight never before seen, for liberals are crazed and energized to wrest control back from Republican control.

It would be foolish and disastrous to discount the anger that is on the Left.   The fight we are now involved in will be long and hard, for the very soul of our nation is being threatened by globalists who desire another direction for this nation.

You can read part one of the MAGA Rally story here that appeared earlier in the week in Illinois Review. http://illinoisreview.typepad.com/illinoisreview/2017/12/thorner-illinois-conservatives-gather-in-rockford-to-make-america-great-again.html