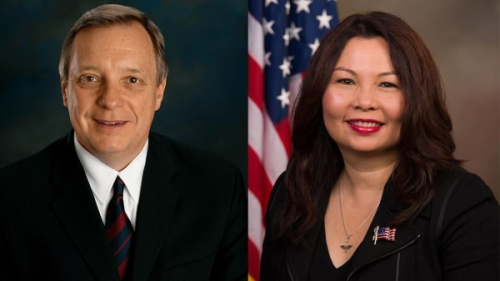 UPDATE: As expected, both Dick Durbin and Tammy Duckworth voted Monday AGAINST protecting 20 week and later unborn babies from the pain they experience during late term abortions. While the measure gained 51 votes in the U.S. Senate, it failed to gain the 60 votes needed for passage.

WASHINGTON DC – It is likely both of Illinois' U.S. Senators – Dick Durbin and Tammy Duckworth – will stick with their pro-abortion supporters and vote Monday against the "Pain-Capable Unborn Child Protection Act." The measure makes it a crime for any person to perform or attempt to perform an abortion if the probable post-fertilization age of the unborn child is 20 weeks or older. The bill already passed in the House.

Durbin voted against the same effort in 2015, as did the Republican abortion supporter, then-U.S. Senator Mark Kirk.

Duckworth's vote will be of special interest, as the second child she is now carrying is due in about 12 weeks – meaning her own baby is past the 20 week mark. The 49 year old will be the first to deliver a baby while she's serving in the U.S. Senate.

The Pain-Capable Unborn Child Protection Act recognizes that unborn babies as young as 20 weeks have pain receptors all over their skin in a concentration equal to or greater than that of adult skin. S.B. 1922 also requires that appropriate medical care be given to any child who survives an attempted abortion.
This bill provides exceptions for the mother's life or health and for victims of rape and incest. A physician who performs or attempts to perform an abortion under an exception must comply with specified requirements. A violator is subject to criminal penalties-a fine, up to five years in prison, or both.
There are just seven countries in the world that allow abortions after five months of pregnancy. That disgraceful list includes the United States, North Korea, China, Canada, the Netherlands, Singapore, and Vietnam.
A former abortionist, Dr. Anthony Levatino, gave a powerful testimony before Congress that he had performed 1,200 abortions-over 100 late-term abortions up to 24 weeks. Dr. Levatino said, "Imagine, if you can, that you are a pro-choice obstetrician/gynecologist like I was. Using a Sopher 13" clamp with rows of ridges or teeth, you grasp anything you can inside the womb. Once you've grasped something inside, squeeze on the clamp to set the jaws and pull hard-really hard. You feel something let go and out pops a fully formed leg about six inches long. Reach in again and grasp anything you can…and out pops an arm. Reach in again and again with that clamp and tear out the spine, intestines, heart and lungs."