Brzoska: In Response to Rauner Attacks on Ives 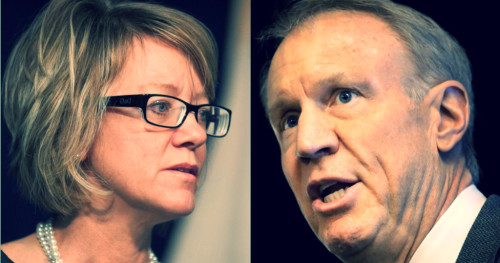 In the six or so days since Jeanne Ives whipped Governor Rauner at the Chicago Tribune Editorial Board, I have seen more fire and fury from the ILGOP against a Republican candidate in this short time than I have seen against their sworn enemy, Michael Madigan, in a decade. I have seen officials and party members that are always telling you how “conservative” they are using the same extremely long leaps in logic and buzz words that come out of the talking heads at MSNBC, the Young Turks, and Vox to paint their opposition as racist and remove her.

The attacks and calls for removing commercials and canceling speakers are coming from the right, not the left. This is sickening. You don’t see this type of division and creation of bulletin board material for the opposition party among Democrats. Before today, I saw at least three officials on my Facebook wall calling out Jeanne Ives publicly. All of these people have her phone number and if they were a true friend or a team member (Team GOP) they would have contacted her. But they are not friends or true team members. They are climbers, appointees, and any other description you can have for the simple political hack.

The last three days in particular have confirmed that the ILGOP is more concerned with keeping its current biggest donor than improving the lives of the people of Illinois or attracting people to build their lives here. Let’s see if Rauner remains a donor past November or if he returns to filling the bank accounts of Democrats. Let’s not forget that he has only been a Republican for three and a half years and that his wife is the leader of Democrats for Rauner.

The last three days have cemented just how bankrupt the Illinois Republican Party is. The Tribune Editorial Board event showed that Governor Rauner cannot run on who he is or what he has done. He cannot run against who Jeanne Ives is or what she has done. Instead he has lackeys inventing a new Jeanne Ives, that could still even beat him (that’s just how bad Rauner is), but would be unelectable in the general election. In fact, you will see the term “unelectable” being used in the attacks on Ives. Look for it to be the repeated drumbeat going forward.

Let’s look at the possible outcomes from deploying these tactics:

It is the Republican Party that is unwittingly “doing the bidding of Mike Madigan” and will be the reason that a Democrat will occupy the Governor’s mansion. ILGOP, if you want a big tent, you need to stop with the baseless attacks and operate with the philosophy that principle and platform are more important than personalities. Stop neglecting the ocean fishing for a single whale. Campaign all you want, but don’t lie about rising stars and sacrifice the future for one self-interested donor.

Most importantly, learn the lesson that results wins more votes than empty promises.