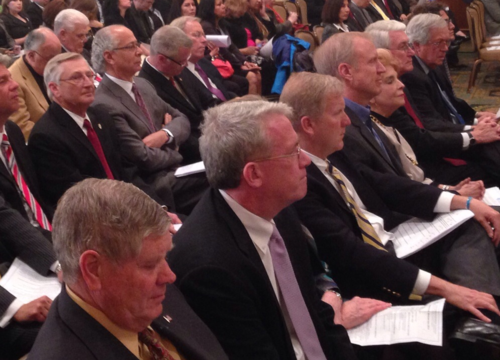 But in all fairness, Governor Rauner's final position of ignoring the families, the Illinois Republican Party platform and signing into law SB 31 shouldn't have been a surprise. There were signals all along that Governor Rauner sided with the Chamber of Commerce's pro-amnesty policy, as far back as April of 2014.

Exelon's then-chairman John Rowe led that April 2014 event, calling for a "pathway to legal citizenship," which has become code for amnesty for those who have broken the law and entered the country illegally.

"If elected politicians don't stand up for the rule of law what good are they?" Walsh said he believed "in his bones" that should amnesty be granted, a third party will be formed the day after.

Despite all the indications of a pro-immigration policy, state Tea Party leaders encouraged conservatives to support then-challenger Bruce Rauner over incumbent Governor Pat Quinn in the November 2014 General Election. Their support, along with the tepid support of Illinois conservative leaders such as Family PAC's Paul Caprio and conservative State Rep. Tom Morrison, Rauner won and Quinn was ousted.

Rauner was sworn into office January 2015.