Letter to Editor: You don’t believe those Rauner ads about Ives, do you? 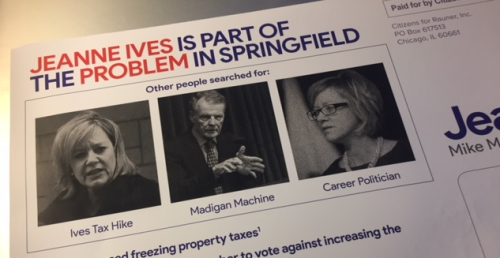 You don't really believe those Rauner ads attacking Jeanne Ives, do you? See the Youtube video, when both governor candidates were before the Trib editorial board. Hear Jeanne's comments about Speaker Madigan in context. Jeanne has the moxie to defeat the Democrat nominee. Rauner hasn't a prayer!

The only governor candidate who is a veteran, Ives's degree from the U.S. Military Academy at West Point was in Economics.  She has logical, well-considered plans to address the myriad problems in Illinois.  No airy phrases from this woman – she talks serious policy.  It's downright refreshing.  She is also not cowed by powerful men, including Speaker Madigan.

Ives and her husband have two sons in the military. Ives' Lt. Governor candidate is a former IL House member, now serving on the Rock Island County Board, who farms and teaches at a college. Bright guy – Rich Morthland. IvesForIllinois.com

Gary Grasso for Illinois Attorney General is the pro-life choice.

By James P. Economos DDS, DDSGiven the recent amount...
Previous article
Reeder: What does “downstate Illinois” mean to you?
Next article
Thorner: Taxation and Tax Reform explained in Beer