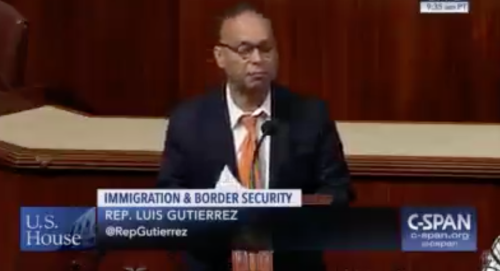 WASHINGTON DC – In a heated discussion on Congressman Bob Goodlatte's "Securing America's Future Act of 2018" Thursday, Illinois' retiring Congressman Luis Gutierrez (IL-04) stepped to the podium of the US House and ripped Republicans, the President and anyone else that supported H.R. 4760.

"The reelection strategy for every single Republican Member of the House is to stand strong with a President willing to take children from their parents in order to look mean and nasty when children are fleeing for their lives. You own that. That is your campaign strategy…." Gutierrez said.

Then he stepped up the rhetoric as only Congressman Gutierrez can do.

"Republicans want to be both the arsonists and the firefighters, and you can't be both," he said, pointing his finger.

How did your Illinois Congressman vote on H.R. 4760? All but one Illinois Republican voted yes, all Democrats voted no.