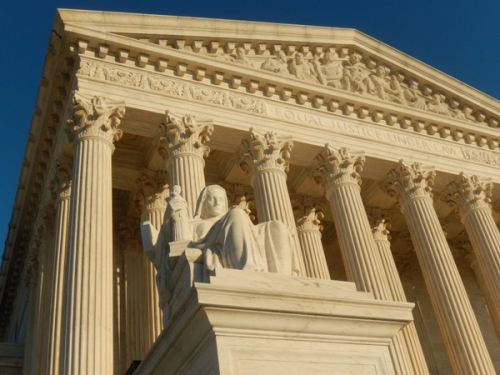 SPRINGFIELD – Several Illinois lawmakers are expressing their thoughts about the US Supreme Court decision Wednesday that effectively set up "right to work" policies for state employees nationwide.

State Rep. Allen Skillicorn (R-East Dundee) said: "Let me be crystal clear, this is about political special interests, not labor. Workers who wish to remain members of their union are unaffected by the ruling. This is a major victory for worker rights and democracy."

Skillicorn went on to call for two bills he's introduced to move forward: HB673 and HB4419, which allow employees to organize, negotiate, or bargain collectively with their employers through representatives of their own free choice, and protecting them should they choose not to. And so are her Democrats counterparts in the Illinois Senate:

“The ability to collectively bargain provides economic power and protections that for decades strengthened working families across this country.

"I am disappointed that the U.S. Supreme Court sided with anti-union corporate interests who seek to redefine the very meaning of the word ‘collective’ for no reason other than to enrich their own bottom line at the expense of workers.

"I remain a believer in the role of organized labor and collective bargaining to make our workplaces and communities strong. Unions were born of challenges and sacrifice. I have faith that they will weather this challenge, too.

"But that belief doesn’t change the fact that this is a fundamentally disappointing decision and harbinger of where this anti-worker political agenda will go if we don’t protect the economic rights of working men and women.”

Bruce Rauner filed suit over fair-share fees in 2015 shortly after becoming governor. The Supreme Court’s ruling, which overturns a 1977 decision, has implications for collective bargaining units all over the country.

“The SCOTUS today just dismantled the fundamental concept of a contract. In siding with Mark Janus, the court sets up a classist system where union workers must pay the bill for workers to receive the hard-fought wages, benefits and job protection rights that come from collective bargaining.

This decision is, without a doubt, a substantial attack on organized labor and the equality and fairness that generations of union activists have shepherded. Make no mistake, this is an example of just how much harm one greedy, ideological decision of “activist judges” can inflict on millions of Americans – especially hard-working people of color.

Organized labor thrives when the wealthiest and greediest among us have the arrogance to systematically limit the opportunities for the majority of us. And I’ll stand anywhere I can to help organize with teachers, laborers, social service workers, moms, dads, neighbors and friends who are ready to fight for economic dignity.”

“As if the middle class doesn’t have enough problems already, the Supreme Court today chose to put wealthy corporate interests ahead of working people in Illinois and across the country,” said Manar, a Bunker Hill Democrat whose district includes a large number of unionized state employees, as well as many trade union members.

“This case was never about freedom of speech. Its aim from the start was to stifle the voices of teachers, first responders and other frontline workers across the country,” Manar said.

“Make no mistake: the corporations and far-right dark-money organizations behind this case that desperately want more control over government to advance their own interests benefit the most from weakening collective bargaining and diminishing the voice of union labor.”

State Senator Dave Koehler expressed concern with the U.S. Supreme Court decision to erode collective bargaining rights for workers who depend on unions to amplify their voice in the workplace.

“Unions use collective bargains to improve wages, working conditions and benefits for workers across the board. This decision allows some to not have to pay for that representation but still get to enjoy the benefits. That is just plain unfair,” Koehler (D-Peoria) said.

He noted that 2018 marks 50 years since Dr. Martin Luther King Jr. was assassinated in Memphis while there to support sanitation workers in their fight for collective bargaining rights.

“Although Gov. Rauner has no regrets about what he’s done by pursuing an end to fair-share fees, I fear today’s Supreme Court decision will have far-reaching economic consequences for America’s already shrinking middle class,” Koehler said.

“This is the result of Gov. Bruce Rauner’s obsessive attacks on teachers, police officers, firefighters and all the other public employees who do difficult work on behalf of taxpayers every day,” said Cunningham, a Democrat representing Chicago and the southwest suburbs.

“The middle class is shrinking in our nation, and it is in large part due to the loss of union jobs. Those losses will accelerate with the Janus decision. It’s both shameful and telling that the governor will count this set-back for working families as one of the few ‘accomplishments’ of his tenure.”

“Today’s court decision will have a direct impact on the income, health benefits and overall standard of living for thousands of public workers and their families across our nation. These are workers who care for our children, protect our environment and keep us safe.

“At a time of historic inequity in our economy, this is the latest blow to working families that will have a ripple effect for decades to come. It also shows us that partisan gamesmanship in Washington is continuing to enrich special interests at the expense of working families.”