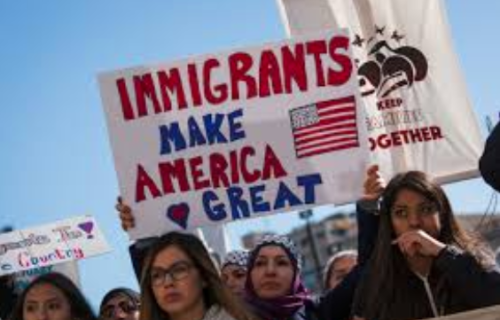 President Donald Trump was catapulted into office on the pledge to crack down on illegal immigration.  As of 2017, FAIR estimates the number of illegal aliens in the US to be approximately 12.5 million; however, estimating the size and characteristics of the illegal alien population is an inexact science.

Anyone claiming to have calculated a definitive number should be looked upon skeptically, as there is no central database of illegal aliens.  Additionally, the Department of Homeland Security only counts those who enter and leave in a lawful manner. Those who evade immigration authorities or sneak across the border are not counted.

Since 2016, some 110,000 children have entered the U.S. illegally and been released, along with 200,000 Central American families caught sneaking across the border.  Since the dramatic surge of border crossings in 2013, the federal government has placed more than 180,000 unaccompanied minors with parents or other adult sponsors who are expected to care for the children and help them attend school while they seek legal status in immigration court.

As to why a solution can't be found, members of both parties favor open borders — Democrats want votes and Republicans want cheap labor — but Democrats and the media are doing what they always do, driving emotions rather than rational thought. Thus the immigration war has reached a frenzied peak in media hype.  Breitbart provides nine examples where MS-13 gang members — the murderous El Salvadorian gang that Democrats defended last month — used these immigration loopholes to try to enter the U.S. in hopes they would eventually be released.

The lies have also never been greater, as when the story broke about the detained immigrant minors. The leftist media blamed Trump, neglecting to mention the incident happened during the Obama years

Every liberal media outlet and personality is being used.  A slew of Hollywood celebrities took to Twitter to criticize President Donald Trump after he ended the policy of separating illegal immigrant adults from minors apprehended at the southern border, including actor Tom Arnold.  The result has been escalating violence and intimidation against anyone who would stop the sacred right of foreigners to ignore our laws and our borders.

Additionally, Sarah Sanders gets kicked out of a restaurant. A group of protesters gathered outside Homeland Security Secretary Kirstjen Nielsen’s Virginia townhouse chanting “no justice, no sleep” and blaring audio of immigrant children crying.  Florida Attorney General Pam Bondi was harassed when she attempted to attend a screening of the Mister Rogers movie, Won't You Be My Neighbor.

California Democrat Rep. Maxine Waters is creating a dangerous situation when calling for total social warfare against the entire Trump administration.  She cheered on those who have attacked or rebuffed them at restaurants and their homes and said at the speech, "Let’s stay the course, let’s make sure we show up wherever we have to show up.”

Burt Prelutsky is a friend, a TV screenwriter, humor columnist, movie critic, and author of eight books, as well as having his own subscription list where he posts six witty political commentaries per week.  If you care to subscribe contact Burt Prelutsky at [email protected].  If anyone is in Los Angeles during the week of July 13-19, contact Mr. Prelutsky for details on how to attend his movie,“Angels on Tap”, a delightful comedy about a barroom full of disgruntled angels. You are sure to recognized many of the actors from popular sit-com TV shows.

There was a time not that long ago when the United States was a magnet for the best and the brightest.  There was even a term for it.  It was called the Brain Drain.  Inventors, research chemists, nuclear scientists, accomplished writers, composers and musicians, couldn’t wait to leave Europe and Asia for the greater opportunities awaiting them in America.

That was then, this is now.  Somewhere along the way, Congress decided that we had more than enough brains, and that what we needed were steady streams of cheap labor and more potential Democrats.  If either group included terrorists, it didn’t matter very much because the lawmakers were well-protected; at least until a Bernie Sanders supporter decided to shoot up a baseball diamond.

And so we threw open our doors to Castro’s most vicious felons, Haiti’s AIDS-infected victims, Mexico’s unskilled millions of terminally unemployed, and unvetted refugees from the Middle East.

When questioned about their motives, both parties start yammering about ours being a nation of immigrants and pretending that Emma Goldman’s schmaltzy poem, “The New Colossus” — which has been immortalized simply because some dumb cluck decided it should be attached at the base of the Statue of Liberty — is the final word when it comes to our immigration policy.

When it comes to these foreign trespassers, the derangement syndrome is so wide-spread that even the usually silent Laura Bush, one of only two Texas residents who are protected 24/7 by the Secret Service, felt compelled to announce that separating lawbreakers from their children was breaking her heart.

In order to cut our way through the flapdoodle, we have to acknowledge a few facts.

One, children in America are separated from their parents on an hourly basis, either because their fathers or mothers are headed off to jail or on a military mission.  That’s life, and I don’t believe that Mrs. Bush’s heart breaks each and every time it happens.

Two, it is not Donald Trump or the Border Patrol that makes the decision to risk having family members separated.  It is the parents who decide to either cross the border illegally themselves or to send the kids ahead to ease the way to follow them via chain migration.

Three, as we have now discovered, the adults who accompany the kids aren’t always their parents.  They are nogootniks who use the children as props because they know that the way the law is written, the kids can only be held for 20 days and the authorities are likely to simultaneously release their “parents” into the general population, relying on an empty promise that they’ll return for a court date.

There is a reason, even if such bleeding hearts as Jeff Flake and Susan Collins choose to ignore it, why there has been a 314% spike this year in the number of fraudulent cases of adults entering the country with children they either abducted, purchased or borrowed, who are no more related to the kids than I am.

If I could figure out a way to keep birds from landing on it, my border wall would be an electric fence.  I wouldn’t be hiring more judges to adjudicate cases at the border.  There’s nothing to adjudicate.  If you’d like to come to the United States legally, fine; fill out the paperwork and take your place in line.

I fully understand the desire of poor people in Mexico and Central America to come here.  But I also understand poor people in Africa, Asia and Europe, wanting to do the same.  But I see no reason to treat Latinos better than everyone else simply because they don’t have to cross an ocean to get here.

And I certainly see no good reason to roll out the welcome mat simply because the Democratic politicians want to import voters and Republican business owners want easy access to cheap labor.

Most people will describe a “problem” in terms of something that needs to be done. That leads to a lot of confusion and generally ineffective solutions. In business and the sciences, a “problem” is best described in terms of some event or observation that should happen but doesn’t or something that happens unexpectedly. Problem solving can only start when you have defined the problem.  It involves a search for the root cause and what can be done to change it.

In politics there is no consensus of the true nature of any problem, only the opportunity to blame the other side for its consequences.  If you do solve a problem, you’d have to invent another one to take its place in the political discourse.

President Trump knows how to identify and solve problems. To the Creatures of the Washington Swamp, that’s tantamount to taking their jobs away, and they're not having it.