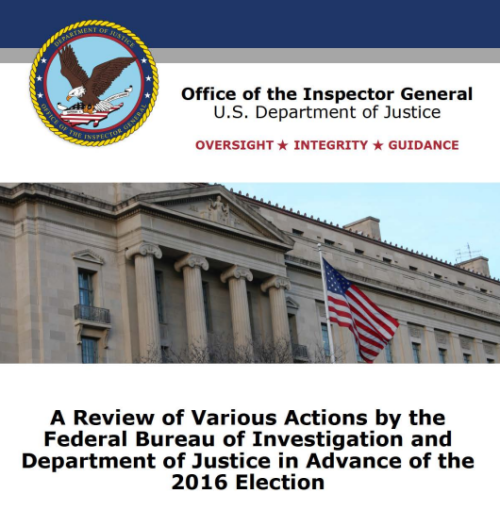 It’s all coming together with the release Thursday of the Inspector's General Report on the Clinton investigation, A Review of Various Actions by the Federal Bureau of Investigation and Department Justice in Advance of the 2016 Election.  Read it for yourself here.

Among other things, it confirms that there is a political wing in the FBI which feels it has the right to act as kingmaker in national elections. From other reports, similar functions exist in the DOJ, the CIA and NSA. If this sounds familiar, look back at the old Soviet Union, which took political action to extreme in the KGB (internal security) and GRU (foreign intelligence), and to a great extent, their current versions under Putin.

The FBI as a political entity is nothing new. J. Edgar Hoover headed the FBI since its inception in 1935, and its predecessor since 1924 – a total of nearly 50 years, ending only in his death in 1972. According to Harry Truman in 1948, " … [W]e want no Gestapo or secret police. The FBI is tending in that direction. They are dabbling in sex-life scandals and plain blackmail. J. Edgar Hoover would give his right eye to take over, and all congressmen and senators are afraid of him." Hoover owes his longevity in that capacity precisely because he held “dirt” on nearly all politicians, including Presidents.

It is becoming clear that President Obama weaponized the DOJ and intelligence agencies against his political foes, especially the Republicans once Donald Trump gained the nomination. Eric Holder, AG, took the point at every opportunity to blame police actions on racism, swell as attempts to reform the election system and immigration. His successor, Loretta Lynch, mostly stood back and watched.

The idea that the director of the FBI would have a 10-year term, was to shield the director from influence of the patronage system, while keeping the term short enough to forestall another Hoover-like dynasty. It’s not working out that way. The real dynasty exists in the top-level executives in the layers immediately below the Director.

These are scary times, and our liberty is at risk. According to the Republicans, the IG report confirms their greatest fears, while the Democrats dismiss it as irrelevant. The difference is that Republicans cite page and paragraph, while the Democrats assume their followers will never read beyond the headlines. We can change that once there is time to digest the real content.