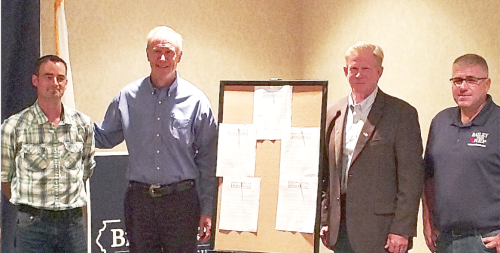 BEECHER CITY –  GOP candidate for State Representative in the 107th District Blaine Wilhour says it is time for a fresh start in Springfield, which is why he wants Democrat House Speaker Madigan ousted in the next General Assembly. He's challenging his Democrat opponent to step up government accountbility and pick someone else to lead the House in 2019.

Earlier this week, Wilhour and GOP House candidate Darren Bailey joined Governor Bruce Rauner in signing the People’s Pledge. Wilhour pointed to Madigan, who has been House Speaker longer than any other speaker nationwide, is the key reason for the state's troubles.

“Signing the Peoples' Pledge is a no-brainer for me,” Wilhour said. “I have built my entire campaign around stripping the power from the career political class and giving it back to the people. We desperately need a new generation of ‘real world tested’ leaders to step forward – leaders that are not beholden to the self-serving special interests that have driven this state into the ground. If we are going to change the rotten culture in Springfield, we must begin by changing the people whose leadership in Springfield is destroying our state." (People's Pledge is below)

Wilhour said he supports term limits, and said he would not tap into the state's struggling pension system.

“I will not participate in the legislative pension,” Wilhour said. “Parttime public servants should never receive taxpayer-funded pensions. I intend to lead by example. We are never going to solve the state’s pension crisis as long as the very people charged with solving these issues are themselves part of the problem.”

Wilhour also challenged his Democrat opponent to rise above partisan politics and make a similar pledge for the good of Illinois.

“Today I call on my opponent to take a clear stand on these important issues,” Wilhour said. “The people of District 107 deserve leadership that will stand up to Madigan and the Chicago Machine. That’s what you are going to get from me.”

Wilhour, who would serve in the seat from which State Rep. John Cavaletto is retiring, is a family farmer in Fayette County. He's married with three young sons. He's been endorsed by the Illinois Farm Bureau, Illinois Family Institute and Illinois Federation for Right to Life.

The pledge Wilhour, Bailey and Rauner signed is found at www.firemikemadigan.com: