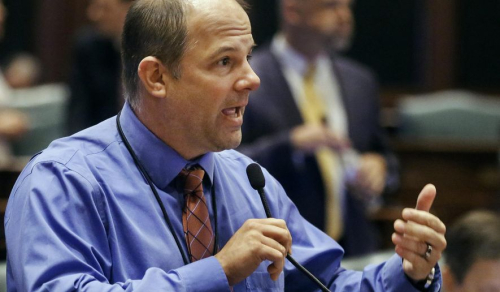 PLAINFIELD – State Rep. Mark Batinick (R-Plainfield) proposed a solution to Illinois' $130 billion pension earlier this week – something he says the state's Democrats have yet to offer – but Batinick was a bit stunned when groups he considers like-minded fiscal conservatives and friends sharply criticized his idea.

Batinick, who serves on the Illinois House's pension reform committee, suggested the state enact a reverse ramp – by beginning with paying in larger amounts to the pension debt in order to save the 7% interest the state now owes on unpaid contributions.

That, Batinick said, would stop the bleeding – not correct the problem. But for him, it's a place to start.

"Having a plan to stop the bleeding from the unfunded liability does not mean we shouldn't stop the pension abuses," Batinick told Illinois Review. "There should be a moratorium on benefit enhancement."

The criticism from once-friendly sources focused on Batinick appeared after he posted on his website support for the Center for Budget Accountability's pension solution. Batinick wrote:

The CTBA’s plan would level pension payments out over the next 25 years until we reach the required funded status. However, this plan would require the state to contribute additional funds over the next 8 years. The initial additional investment by the state would be $2.4 billion which would then slide downward to $320 million in the eighth year. Over the course of eight years additional, and significant funds, would be invested into the pension plans.  In total roughly $11 billion extra would be invested quickly.  The net effect of this would be that our annual pension payment would never rise above $12 billion.  In fact, around the tenth year, our pension payments would actually start to decrease. One important note is that if our system was fully funding pensions in the past, our ongoing costs would only be $2 billion per year.

The CTBA recommends borrowing the additional $11 billion investment.  That is where the plan can be tweaked.  Borrowing another $11 billion adds additional pressure to the budget.  It also does not allow us to phase in property tax relief which is part two of the plan.  We need to, and can, find the additional $2.4 billion per year elsewhere.

Perhaps Batinick’s handlers didn’t tell him what exactly was in the CTBA plan. Or maybe he’s just so frustrated with what’s going on in Springfield that he’s convinced himself parts of their plan make sense.

But if you read the CTBA plan – and take into account the group’s goal to defend the current pension scheme at all costs – it’s pretty easy to see that Batinick is way off course.

Dabrowski pointed out three egregious errors in Batinick's misguided plan. He then handed over the arguments to his Wirepoints colleague Mark Glennon, who didn't hold back biting words in his piece entitled "Rep. Batinick's sham pension and property tax fix for Illinois" …

If you thought fiscal quackery in Illinois came only from Democrats, you haven’t read “How to solve the Illinois pension crisis and dramatically lower property taxes.” It’s by State Rep. Mark Batinick, a Republican from Plainfield. The article also appears under a different headline this week in the Herald-News.

What Batinick did is add distortions on top of an already phony pension plan offered by the Center for Tax and Budget Accountability. That’s right, a Republican is using the union-backed CTBA as his foundation.

For most Illinois taxpayers, their eyes glaze over when the pension mess becomes the topic. It's not an easy topic to consider and when one does, the situation is overwhelmingly depressing and hopeless.

Wirepoints' proposals are dramatic, detailed and would work in states with legislatures committed to reform. Batinick's are maybe less drastic, but they're still solutions that are on the table that are causing discussion in a deeply-divided state legislature controlled by Democrat liberals that see no reason to keep taxes low.

"It's the art of doing," Batinick said.

And what's it like to have your ideas publicly rejected by folks that have been your friends and associates up until now? we asked Batinick.

"At least we are actually having a discussion about the biggest problem in the state.  It would be nice if the Democrats would lay out their plan."

That is what we're all waiting to see …