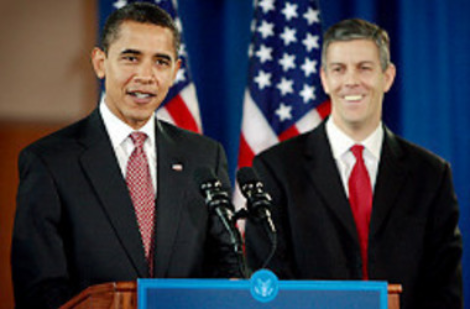 CHICAGO – Chicago native and Obama hoops buddy Arne Duncan is on the lecture tour promoting his new book "How Schools Work," a memoir of his time as US Secretary of Education in the Obama Administration. This week, Duncan told an audience that Donald Trump doesn't want an educated workforce that would challenge his position, and that Trump's desire to promote school choice is evidence of that.

Duncan criticized the Trump administration’s emphasis on school choice as “a small strategy” rather than an overarching goal, before taking aim at the president himself.

“I’m not sure President Trump wants to have the best-educated workforce,” Duncan said. “I think it doesn’t play to his authoritarian tendencies.”

Those who've reviewed Duncan's book say Duncan learned nothing about how parents view schooling as secretary of the nation's education department. In fact, Duncan's comment that he regrets no pushing harder for Common Core – an education experiment that flopped nationwide.

When Arne Duncan was named the ninth U.S. secretary of education in early 2009, the National Assessment of Educational Progress (NAEP) had shown a decade of substantial growth, efforts to launch the Common Core and reform teacher evaluation were getting under way with ample support and little opposition, and education seemed a bipartisan bright spot in an increasingly polarized political climate. Seven years later, when Duncan stepped down, NAEP scores had stagnated, the Common Core was a poisoned brand, research on new teacher-evaluation systems painted a picture of failure, and it was hard to find anyone who would still argue that education reform was a bipartisan cause.