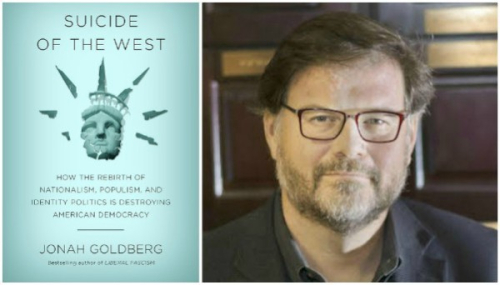 Central texts on political philosophy are usually pretty unpalatable. If you, dear reader, are anything like this reviewer, you have to will yourself through them. If they were a food, they’d probably be brussel sprouts, cooked poorly for an extra touch of bitterness. Jonah Goldberg has been a consistent exception to this rule, so is his latest work, Suicide of the West. If we were to continue with the food analogy, this book would be a horse pill for your dog that you wrapped in a piece of bologna. Plenty of substance yet goes down surprisingly easy.

Suicide of the West shows that the wonders of life in the West are thanks in large part to our development of institutions that cut against the grain of human nature. As Goldberg notes, “Capitalism is unnatural. Democracy is unnatural. Human rights are unnatural. The world we live in today is unnatural, and we stumbled into it more or less by accident. The natural state of mankind is grinding poverty punctuated by horrific violence terminating with an early death.”

Goldberg traces first the triumph of the West, how in a brief span of human history man climbed “from the swamp to the stars.” That climb, however, was anchored on a tenet at the very core of conservatism, gratitude.

But gratitude for what Goldberg calls “The Miracle” is an affirmative act, “defenders of the Miracle can

never get cocky…, cultures that do not cherish their best selves die by their own hand. We protect what we are grateful for. That which we resent, we leave out for the trash man or let rot and decay in the elements, as the termites of human nature gnaw away at it. Ingratitude is the spirit that inebriates us with despair and, in our dark moments, makes suicide seem heroic.” If we are ignorant of what we have gained and why it is precious, nature will inevitably rust away the structures we have built to keep it out.

Jonah looks at our own history and asks, what is holding up our commitment to the Constitution itself? There are dozens of nations across the globe with more fulsome declarations of rights than our own that don’t adhere to any of them, many whose founding charters are mere scraps of paper. Indeed, “the only thing that gives the Constitution real lasting power is our commitment to it, and there’s nothing preventing us from walking away from it other than our refusal to do so. And we cannot be forced to stay committed to our principles.” This fact makes the founders’ commitment to virtue and good character all the more essential.

Special care is given to note the powerful role unheralded advances have played in hemming in our tribal nature. As an example, Goldberg highlights the process of incorporation before the United States. A process previously, “entrenched in politics and status. It was a special privilege, akin to being granted a title to land. Now… instead of businessmen anxiously seeking the special privilege of incorporation, the states competed for the favors of businessmen.” This “iron triumvirate of class, guild, and throne” stifling upward mobility to the few and connected was broken by such a simple, largely forgotten act.

Looking forward, what then Is our fate? We have a rising generation “so ignorant of their own civilization that they have no response to those who insist with righteous passion that our civilization is not worth defending. uninterested in defending the very soapboxes they stand on and, often, all too eager to take a sledgehammer to them in the name of fighting ‘hate speech.’ Yet they are not entirely to blame for their empty headedness. Quoting C.S. Lewis, Goldberg notes that, “We make men without chests and expect from them virtue and enterprise. We laugh at honor and are shocked to find traitors in our midst.”  Without an appreciation for the blessings we have inherited, an appreciation that must be taught, and a commitment to fight to maintain these institutions, human nature will reclaim what is hers.

Other than Suicide of the West, Mr. Goldberg also produces an excellent weekly podcast called “The Remnant,“ which explores conservative thought with a depth, liveliness, and insight hard to find elsewhere.

By Illinois ReviewIn a Facebook post on Tuesday, former...
Previous article
Illinois Public School Principal Turns $358,000 into $7.1 Million
Next article
New York Times tells us what we already know: the 6th CD race will be close