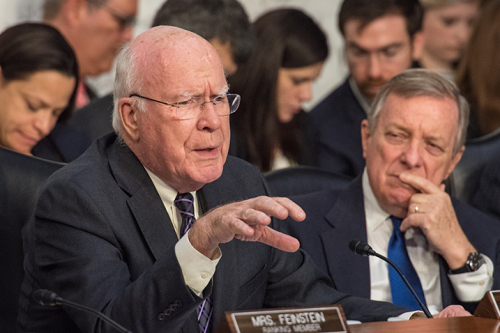 Our legislators have been at their worst over the Supreme Court confirmation of Judge Brett Kavanaugh. What a shameful display: condescending, arrogant show-boating senators questioning him in a manner reminiscent of the Grand Inquisitor. The only things missing from this B-grade movie were the rubber hoses and interrogation lights. Some of us remember that you could count on one hand the “nay” votes for the confirmations of ACLU attorney Ruth Bader Ginsberg and known conservative Antonin Scalia.

This last-ditch effort to derail Judge Kavanaugh’s confirmation is more than mere political theater; the interrogators are immoral and beyond hypocritical. The “Lion of the Senate,” Ted Kennedy, killed a woman and former Senate majority leader Robert Byrd was an Exalted Cyclops in the Ku Klux Klan, and we all know about President Clinton. But that’s okay; their lapses in judgment were somehow worth our compassion and forgiveness.

Imagine if these political hacks were in charge of your medical care. Medicare-for-All as planned is the exclusive purveyor of medical “benefits.” If you want a medical service they do not want you to have, you are on your own.

The government is already shaping the way we use medical services. The Palliative Care and Hospice Education Training Act (PCHETA), S. 693 and the companion bill H.R. 1676 passed by the House and is now before the Senate Health, Education, Labor, and Pensions (HELP) Committee. This bill dedicates $100 million in additional taxpayer dollars to persuade patients to forgo treatment that might prolong life in exchange for a steady stream of increasing doses of narcotics. Perhaps knowing that many physicians still adhere to the Oath of Hippocrates, the legislators included multiple non-physicians and non-medical personnel as recipients of these funds.

Including outsiders in decision-making must be undertaken with caution. Hospice/palliative care has become the new growth industry in our “health system.” Compared to home health care, hospice had significant growth in 2017 – increasing 6.5 percent in one year. Further, according to the Medicare Payment Advisory Commission the “Increase in hospice is driven by for-profit providers” which made up two-thirds of the 4,400 hospices in 2016.

Why direct $100 million for a new medical specialty in relieving pain and suffering, a skill all physicians should embrace as part of a comprehensive treatment plan? The focus on palliative care may be one more bipartisan incremental under-the-radar step along the road to government control of our medical care. Subtly devaluing life softens us up and primes the pump for rationing – without having to pass a sweeping single payer bill that is bound to draw attention and criticism.

Ironically, within days of passing the Palliative Care bill, the Senate passed a huge package of some 70 bills designed to reduce opiate abuse. Unafraid to practice medicine without a license, the Senate legislated prescribing mandates and penalties for failure to comply. And the government is developing a “system of care” where all people will receive “appropriate” and “evidence-based” care for pain.

So now physicians may be under pressure to relinquish their patient to a palliative care specialist and prescribe medications according to government dictates. This is wrong. Our patients must never have any doubts that every treatment their physician administers is in their best interests.

We must not allow the whims of politicians to direct our medical care. Physicians must refuse to be tools of the government. Patients must decide whether they want their tax dollars spent on developing cures and life-saving treatment – or programs that steer them toward the least costly alternatives.

Bio: Dr. Singleton is a board-certified anesthesiologist. She is also a Board-of-Directors member and President-elect of the Association of American Physicians and Surgeons (AAPS). She graduated from Stanford and earned her MD at UCSF Medical School.  Dr. Singleton completed 2 years of Surgery residency at UCSF, then her Anesthesia residency at Harvard’s Beth Israel Hospital. While still working in the operating room, she attended UC Berkeley Law School, focusing on constitutional law and administrative law.  She interned at the National Health Law Project and practiced insurance and health law.  She teaches classes in the recognition of elder abuse and constitutional law for non-lawyers.

By Illinois ReviewIn a serious blow to Illinois Gov....
Previous article
Leftist #MeToo steps up pressure on US Senators over Kavanaugh confirmation
Next article
Kavanaugh to Judicial Committee: “I will not be intimidated into withdrawing from this process”