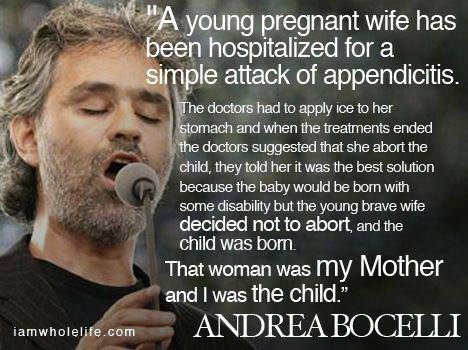 Italian opera singer Andrea Bocelli and his son Matteo released a new video on YouTube that has been viewed over 7 million times in the past week. The deep love and commitment between the father and son has been a powerful antidote in a time of great stress and animosity nationwide.

The elder Bocelli was diagnosed soon after his birth in 1958 with congenital glaucoma, causing him to partially blind. He lost his vision completely at the age 12, after he was hit on the head during a game of soccer.

But Bocelli's story is even more dramatic and powerful, as a young woman was counseled to abort her baby after “a simple attack of appendicitis."

“That woman was my mother, and I was the child. Maybe I'm partisan, but I can say that it was the right choice.”

The world-renowned tenor said he hoped the story could encourage many mothers in “difficult situations” but who want to save the life of their baby.

About the father/son duet video that is bringing comfort in a difficult time, "Fall on Me," Bocelli says: "Anyone who is a parent, anyone who knows the precious responsibility of being a mother or a father, will fully grasp the meaning of this piece. ‘Fall On Me’ is the first time I have duetted with my son Matteo Bocelli".