LOVES PARK – Sunday, Republicans in Winnebago County woke up to angry messages sprawled on their headquarters' building referring to the nomination of Judge Brett Kavanaugh for the Supreme Court.

The date of the DC contentious Judicial Committee hearing "9/27/18" was spray painted on a wall, along with words "Rape" and "Shame" multiple times.

State Rep. John Cabello (R-Loves Park) – a Rockford police detective when not serving his constituents – posted photos of the vandalism on his Facebook page with these words: "We can have out differences. We can have good-spirited debate. I hope whoever is responsible for this will be brought to justice. You are a coward for doing it unless you come forward!" 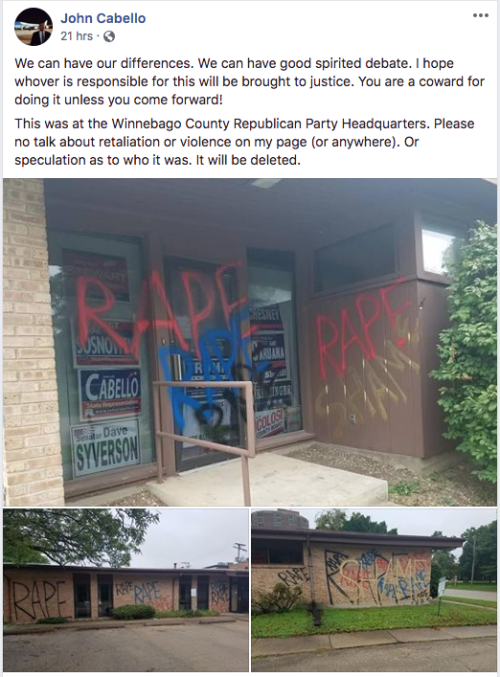 Chairman of the Winnebago County GOP Jim Thompson told reporters, “The Winnebago County Republican Central Committee Headquarters is located in the building in which seven women work each day. It’s the place in which over two dozen female precinct committeemen meet to fulfill their commitment to our community. They should not have to be afraid because some people could not control their hate.”

Thompson, an attorney, hosts the organization in the building his firm owns.

Rockford Mayor Tom McNamara – a Democrat – wrote on his Facebook page: “This type of behavior is unacceptable and certainly does not live up to our community’s values. We all have differences, but we must learn to disagree on policy without attacking people.

“I’ve also directed our Public Works staff to have this graffiti removed immediately.”