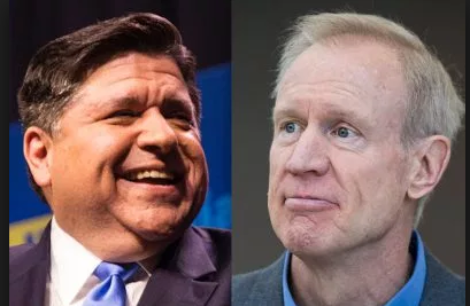 PALOS HILLS – With four weeks until the November election, incumbent Governor Bruce Rauner pulled no punches against his Democrat challenger J.B. Pritzker during a visit with United Southland Republican Women Saturday. Saying his opponent is likely to be indicted for a property tax "scheme to defraud," Rauner said "J B" will stand for "Jail Bird."

"People go to prison for a lot less…" the governor said. After a yearlong investigation of emails and talking to the contractors working on the mansion next door, Democrat Pritzker "cheated on his property taxes, took toilets out right before the inspection, and said 'Nobody can live in this house, it doesn't have toilets. It must be worthless,'" Rauner said.

"Cheated you – if you live in Cook County – out of $330,000. This is fraud, and I can darn near guarantee that he'll be indicted sometime in the coming months. He might set a record – he could be indicted before he would become governor – that would be a record. That would be a record for the state of Illinois, and you know what – What's 'JB' going to stand for? Jail Bird … "

"This is the corruption we have to fight against," he said.

Rauner was pointing to assertions the Cook County Inspector General William Blanchard that were leaked to the media last week about the Pritzkers' "scheme to defraud.  According to the IG's report, the Pritzkers had plumbers remove five toilets removed from house they purchased next door so it would be classified as "uninhabitable" in a property tax appeal filed by the Pritzkers.

Theories among Republicans at the luncheon included the leak about the IG"s report being made because Speaker Mike Madigan is setting Pritzker up to be elected as governor. But the person that will really end up running the state will be Juliana Stratton – a Madigan puppet – betraying Pritzker and sealing his rule of the state's Executive Branch, Legislative Branch and Judicial Branch.