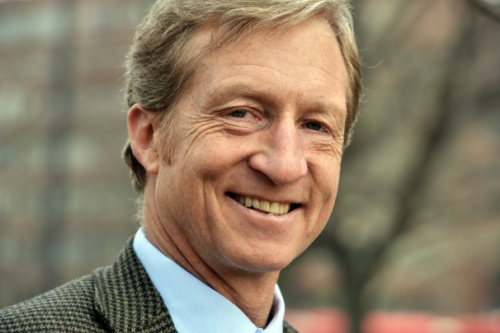 As stated by filmmaker, Andrew Marcus, “What big tech has done to conservative and other undesirable publishers is nothing short of a digital Kristallnacht."  As such, Facebook delivered for Democrats in the midterms by erasing two billion GOP page views, thereby eliminating conservative content to suburban females.  While in 2016 suburban voters and women would check Facebook pages and get conservative news, it’s no longer true.  These same voters went Democrat in the midterms.  Here's more on the Silicon Valley totalitarians.

About the only good news is that Silicon Valley liberals like Tom Steyer have political tin ears.  Because Steyer gave the Democrats $100 million plus, he now demands they impeach Trump.

According to Barrons, “Infrastructure, Impeachment Are Washington’s Hottest Topics, says Pimco’s Cantrill.” Will there be more money down the drain for bullet trains and transportation unions in Democrat cities and states?  The Democrat House majority, plus a lot of Democrat victories in the Senate like Tester and Manchin, depended on emphasizing the ability to help local areas and ignore Schumer and Pelosi.  If Pelosi is forced by the left to bring up impeachment, that will further hurt their chances of reelection and any chance of something new done on transportation.

As suggested in this Barron article, What’s Good About Gridlock Forecasts & Strategies by Skousen Investor Café: "If you are going to have a divided Congress for the next two years, it’s best to have the Democrats controlling the House and the Republicans controlling the Senate. The Senate is much more powerful than the House. The House can propose budgets and policy changes, but they must be approved by the Senate and avoid a veto by the president.”

Thanks to naked theft in Arizona, it will be very hard for McConnell, with two open Republican senators that are enemies of Trump (Romney and Murkowski), if the real margin in the Senate is cut to 51 votes. On the other hand, there are about a dozen Democrats in the House that are also going to have a hard time going along with Pelosi.

It can be speculated that Lindsay Graham's recent 180 degree turn from an Establishment spaniel to a Trump enthusiast is entirely political, but Lindsay Graham is right: “When it comes to confirming judges and counting votes, Democrats are amazingly consistent — The law is NO obstacle to the outcome they seek.”

It was understandable for Democrats to be  bitter over a 587 vote loss of president in 2000, but that fiasco cost them in 2002 and 2004. The Democrats should have been content that the recent elections in Nevada, New Hampshire, Arizona, Colorado, the Midwest swing states, and the legalization of felon voting in Florida, was an enormous boost to their chances of beating Trump in 2020. Instead they can't help but reveal their inner totalitarian and further discredit themselves and their media allies.

Things are obviously suspect for fraud in Florida.  Democrats are dismissing any talk of fraud as conservative conspiracy, even though Brenda Snipes allowed illegal aliens and felons to vote illegally and also destroyed ballots. In Broward County employee signed an affidavit confirming that elections staff filled out blank ballots.

Even liberal 538.com is pointing it out, squealing in excitement that their fellow liberals might steal a Senate seat.  Local liberal media outlets can only make transparent excuses, such as, “Whoops! Brenda Snipes’ office mixed bad provisional ballots with good ones.” Even a Florida Congressman was roughed up when police stopped Rep. Matt Gaetz from filming Florida election officials. Rep. Gaetz has video of police removing him from an area where boxes were being secretly loaded onto trucks outside of the election supervisor’s office in Broward County.

As Florida’s senator Marco Rubio reported on Twitter: “Under #Florida law county must upload by 7 p.m. day BEFORE election ALL early votes canvassed & tabulated by end of early voting & report results within 30 minutes of polls close. 60 hours after that deadline only 1 of 67 counties is still counting early votes.”  Already reported is how there are going to be more votes than registered voters in several precincts in Broward. County.  The Democrats have gone beyond the usual 104% of adults (according to the census) over 18 “voting” to a new level of blatant fraud — more “votes” than even fraudulently registered “voters”.  We can only hope that the whole crew in Florida led by Brenda Snipes, who has been stealing Democrat primaries as well, gets their day in court.

Although Stacy Abrams is well behind in Alabama, she is still throwing a tantrum. Meanwhile, Democrats find surprise ballots that could possibly sink Brian Kemp's bid for governor.

Trump on Arizona Senate race: “Just out — in Arizona, SIGNATURES DON’T MATCH. Electoral corruption – Call for a new Election? We must protect our Democracy!”  But might the fix been in long ago?  The McCain/Mormon wing of the Arizona “Republican” party hates President Trump more than the Democrats.  Nevertheless, Martha McSally will most likely get to sit in the Senate after this race is stolen when Kyl resigns at the end of the year, as he promised, and the Republican Governor (who was easily reelected by 17 points) appoints McSally to Kyl's seat.  Such could be called Senator Flake's revenge.  Recently Flake did slam Trump for doubting the vote count and suggesting that fraud took place.

According to the Wall Street Journal: “Democrats Plan to Pursue Most Aggressive Gun-Control Legislation in Decades.”

Rigged elections, like in any third world failed government, are enforced by gun control.  Might all come down to guns in the end?  Here's the latest action from our socialist friends: “Police officers in Anne Arundel County, Maryland arrived at a man's home to confiscate his guns under the state's Red Flay law.  When he answered the door holding a gun, a fight ensued and he was shot.”

Jeff Sessions was KKK in 2017 and now he is a secular saint.  The flip on Sessions from devil to hero is typical of a party that says their welfare and education policy are “for the children” and who demand unlimited tax funding of abortion. To Democrats “voter suppression” is merely following the election laws.  States and cities can ignore our immigration laws with “sanctuary” actions.  Antifa can beat up and terrorize, but Trump is lawless and another Hitler.

President can expect a rough road ahead as he deals with a hostile media, a recalcitrant-controlled Democrat House, and the Deep State (a shadow government that exists within the federal bureaucracy.