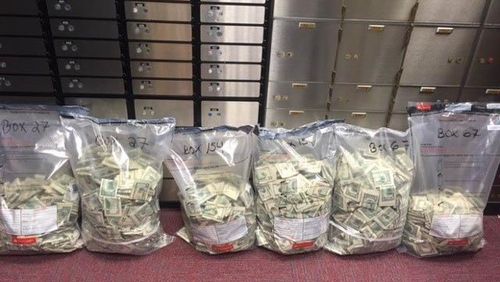 At least $750,000 in cash wasn't found in shoe boxes in a Springfield hotel, like the late Secretary of State Paul Powell's was in 1970. Another cache of $50,000 was found in Powell's state office. His estate was finally found two years later to have a cash value of more than $3 million, plus 61,290 shares of stock in seven Illinois racetracks.

Former Dartmouth, Massachusetts lawmaker John George, 68, has been sentenced to nearly six years in federal prison for embezzling almost $700,000 from his taxpayer-subsidized bus company to bankroll his farm. George was convicted and sentenced to 70 months in prison.

George's sentence also required him to pay $688,772 in restitution and forfeit $1.38 million to the federal government. Following that judgment, the U.S. Attorney’s Office and U.S. Marshals obtained warrants for George's safe deposit boxes.

By James P. Economos DDS, DDSGiven the recent amount...
Previous article
Illinois loses more total population in past year than any other state
Next article
Arn: Democrat State Reps Want SCOTUS To Take Away Right To Keep And Bear Arms