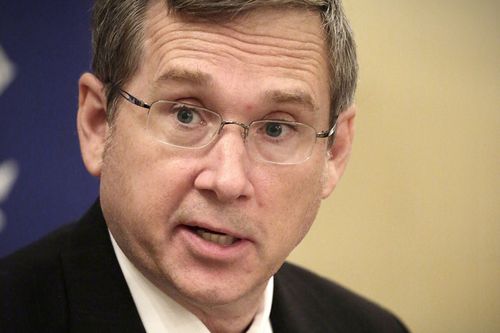 The Chicago's 11th Ward GOP is the third Republican group to have publicly condemned Kirk's voting record in the U.S. Senate. Other party groups include the Aurora Township GOP and the Batavia Township GOP.

"Any and all forms of support which the 11th Ward Republican Party of Chicago, IL customarily gives Republican candidates, including but not limited to promotion in voter outreach efforts, is now revoked from Senator Mark Kirk and his campaign for the United States Senate. The Senator’s name will be removed, or otherwise redacted from all voting guides and materials that this body’s precinct committee persons distribute to their constituents," a two-page resolution accepted by the GOP group says.

The 11th Ward criticized Senator Kirk's recent votes that did not line up with the Illinois Republican Party platform on key issues, including abortion:

Whereas, while entrusted with the office of Senator by the voters of Illinois, Mark Kirk has committed several actions incompatible with the principles of the Illinois Republican Party, among which the following acts are the most recent and egregious offenses upon which this Resolution in Support of Censure is motivated:

1. Voted “nay” on a bill that would restrict-on a federal level- abortion at or past the past the point of fetal viability (assessed at twenty weeks).

2. Voted to defeat the United States Senate effort to de-fund Planned Parenthood. Senator Kirk was the sole member of the Republican Senate to ally with Senate Democrats in voting to continue tax-payer funding of the aforementioned organization after the appearance of significant evidence that it, as a business, was engaged in the dissection and preparation of fetal bodies for purported “research” and apparent profit.

The resolution is signed by 11th Ward GOP Committeeman Carl Segvich and James M. Komaniecki, Secretary and Chief of Staff of the organization.

Segvich told Illinois Review Wednesday that "our 11th Ward Republican Party will NOT be endorsing Mark Kirk for re-election. We are endorsing James Marter for our United States Senate."