Durbin: ‘All Hell Will Break Loose’ Over Abortion Language in Spending Bill 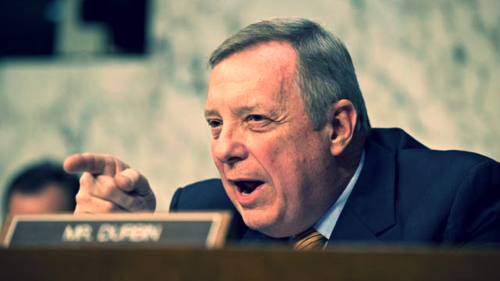 “Just heard about it for the first time today, and if they try to do it, all hell will break loose,” said Durbin. "You can imagine. The phrase ‘Hobby Lobby’ perks up the ears of many members of the Senate.”

The Illinois Democrat said that given recent events, he wouldn’t be surprised if the debate runs up through Christmas Eve.

Durbin’s comments came on a day that members of his party were more bearish than in recent days about getting the work completed on necessary end-of-the-year tax and spending.

Durbin told reporters that when House Majority Leader Kevin McCarthy, R-Calif., said last week the omnibus deadline could get pushed back a week with a short CR, he had a bad feeling about the endgame.

“Let me just be honest having been around here for a little while. When Leader McCarthy in the House said well, if we don’t make Dec. 11th, we’ll make Dec. 18th, and I thought ‘oh my god, it’s Dec. 24th.’ So, I hope I’m wrong,” Durbin said.