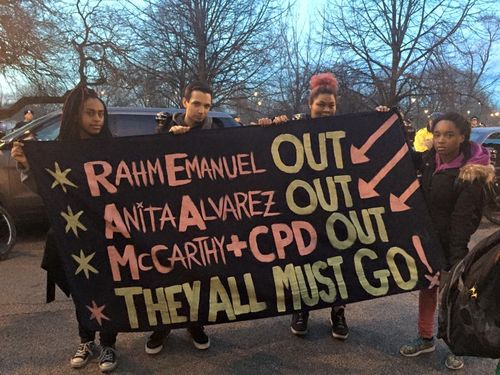 CHICAGO – A band of angry protesters calling for Chicago officials' resignations is growing almost daily – and this week's unusually warm winter weather has opened the way for the activity to increase. Illinois Review's citizen journalist Mark Weyermuller was at the scene and grabbed photos of one Chicago protest Wednesday afternoon – the same day Mayor Rahm Emanuel expressed a mea culpa (literally saying "I'm sorry") to the Chicago City Council.

The marchers are calling for the resignations of Mayor Emanuel, State's Attorney Anita Alvarez, Chicago Police Superintendent Gary McCarthy, and – as the sign above shows – the whole Chicago Police Department. 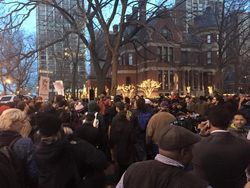 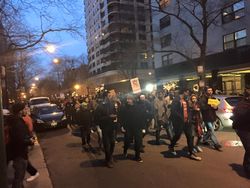 Mayor Emanuel called for his police superintendent to step down last week, but not before he criticized the rank and file for retreating into a "fetal" position in their jobs protecting the Chicago population. John Kass, the Tribune's fearless and principled veteran columnist/reporter, explained the Mayor's bubbling political mess in his column Wednesday:

Just a few weeks ago, Mayor Rahm Emanuel said his cops had gone "fetal" on him.

So what will the cops do now after the mayor threw them all under the bus in his desperately ineffective Rahmea Culpa speech?

They'll go pre-fetal for Rahm. And by summer, as violence in the neighborhoods begins to blossom anew, the incredible shrinking mayor of Chicago will need an awfully powerful ultrasound just to find his zygotes in blue.

"I'm just going to keep my hands in my pockets," said one officer, echoing many I talked to on Wednesday, just after the mayor's speech, as protesters marched down Michigan Avenue shouting, "Rahm resign."

Cops and protesters know how Chicago works, and though Rahm and his biscuit eaters take great umbrage at what I've been saying, I'll say it again for visitors who don't know our ways:

Emanuel sat on that police dash-cam video of a white cop shooting a black teenager, Laquan McDonald, until after the mayor's re-election was secure. The deal was cut before the votes were cast, and after his re-election, he settled the case for $5 million of taxpayer cash. Now his bill is past due.