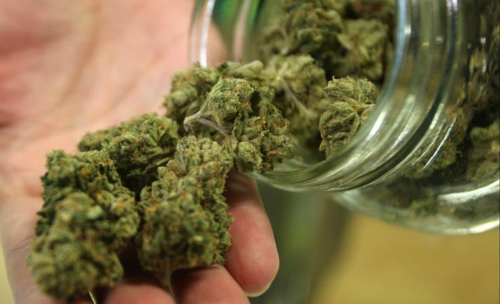 LEMONT – If you're looking for political support to take the use of marijuana a step further from medical use to recreational use, the Illinois Libertarian Party is just what you're looking for. Monday, the Libertarians released a statement boosting Democrat State Rep. Kelly Cassidy's second try at state legislation that calls for cannabis use to be punished with small fines instead of criminal charges.

Libertarian Claire Ball – who is running for  Comptroller – and Scott Schluter – who is running for state representative – each spoke in support of Cassidy's effort Monday. Their praises joined Rev. Alexander Sharp of the Clergy for a New Drug Policy and Rev. Jason Coulter, pastor of the Ravenswood United Church of Christ.

If Cassidy's bill were to be passed into law, possession of up to ten grams of marijuana would only be punishable with a fine. Adults would no longer face jail time and the offense would be expunged in order to prevent a permanent criminal record.

Ball says, "America has a history with prohibition, and that history shows that it doesn't work. Good people are thrown in prison, tearing families apart and creating criminal records that haunt people their whole lives – all from using a substance far less harmful than alcohol. Dangerous black markets arise in its wake, and the ensuing violence destroys entire communities. Today, cannabis is widely accepted and recognized for what it is, and the majority of Americans look forward to the benefits from both medical marijuana and hemp products. This is a step in the right direction for Illinois."

Schluter added that “It's ridiculous that we still have these barbaric laws across the country that throw people in cages because a bunch of old white guys in ties disapprove of their gardens. It's past time that we start getting the government out of our garden and out of our lives."

The lawsuit that both Ball and Schluter filed against the State trying to allow medical marijuana dispensaries and growers from making political contributions is still ongoing. Illinois Attorney General Lisa Madigan has filed an extension. The new due date for a response from the Attorney General is January 8, 2016.