Starkehaus: Knowing the limits of the First Amendment in an anti-Christian America 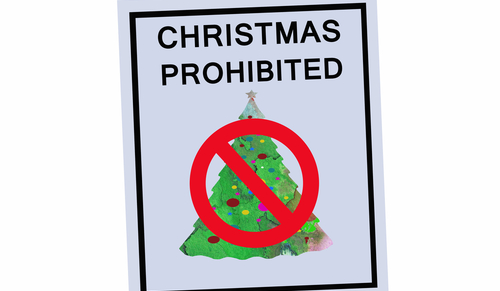 The Leadership Institute under the banner of Campus Reform has a rather festive video that entertains what they describe as the Twelve Bans of Christmas. Sung to the tune of the Twelve Days of Christmas, Campus Reform documents twelve egregious anti-religion policies that have been put in place by universities throughout the country to protect the snowflake Millennials from exposure to oppressive Judeo-Christian hegemony:

It'd be so flipping adorable if it wasn't so flipping horrifying. This list, sadly, is not all inclusive and doesn't even necessarily document the worst offenses being forced upon students in the name of inclusion. Take as a for instance an event hosted by the Muslim Students Association at a Vernon Hills High School here in Illinois called "Walk a Mile in Her Hijab" where non-Muslim girls were recently taught proper etiquette and techniques for hiding their wicked, whorish hair for the greater glory of Allah. (For clarity, this was not an extracurricular activity.)

"You can't really understand or judge a person and their beliefs until you understand why they do it and what it's like for them to do what they're doing," explained Yasmeen Abdallah, president of the school's MSA. "This event is to hopefully denounce negative stereotypes."

*Side note – I just don't quite get the willful misunderstanding about what makes Christians distrust Muslims. It's not the hijab, guys. Many nuns still wear habits. Many orthodox Jews still wear standout attire. What sets those religious orders apart from Muslims is not a dress code. It's San Bernardino.

We can claim for the sake of open mindedness that at some point in space and time, it was certainly possible the terrorist action in San Bernardino came at the hands of an irritated sect of Hasidic Jews…perhaps some peeved, cloistered Carmelites? But as per usual, it came from neither. Seriously, if a dozen or so Bridgetines had been responsible for the Boston Marathon Massacre, I would fully understand a growing uneasiness toward Catholics. And I would speak out forcefully against said organization in an effort to win back the trust of my fellow Americans.

All things being equal (as religion most certainly must be, since no value judgments are permitted by order of the secularists) all organizations are capable of wrong doing. It's just that some organizations seem more capable than others.

But I digress…back to the topic at hand, no word on when the reciprocal "Walk a Mile in His Yarmulke" event will take place at Vernon Hills High School, or if they've scheduled equal time for instruction on how to recite the Mysteries of the Rosary. I'm sure that the students would get a kick out of Sari Mondays where girls could learn the health benefits of Orissi…and if the students find themselves inadvertently consecrated to the temple, then so be it. Tis a small price to pay for inclusion.

Fine. So welcome to the American Melting Pot where religion gets frappéd into one giant slurry of insincere proto-impiety. Mind you, the diluting of differing religious beliefs is a complete one-way street in terms of the interfaith principles of acceptance.

We see a growing withdrawal from moral certainty in Jewish – but more rigorously in Christian communities as they bend over backwards to show a willingness for inclusion at the expense of their own fundamental beliefs and principles. Take Brother Rice Catholic High School in Bloomfield, Michigan – which, at very least, is receiving a harsh backlash from angered parents over the creation of a non-Christian prayer room where their Muslim students can feel comfortable praying…to Allah. The school, however, defends its decision stating that it doesn't discriminate on the basis of "race, creed or color."

Being that it's a Catholic school and all, it might have been taken for granted by parents that they would discriminate on the basis of religious expression. Call it crazy, but religious discrimination used to be entirely expected at Christian schools in favor of their own denominations.

Apparently, Brother Rice of Michigan will no longer let the promotion of Catholicism get in the way of Salah times. Ask and ye shall receive. You need a room and a prayer rug? The Catholics will make sure you get that.

Hopefully there aren't any Satanists or Wiccans attending Brother Rice Catholic High School…dude, you think the Muslims have special prayer needs? You ain't seen nothin'. I just read somewhere that some Satanic group intends to pour excrement on a statue of the Virgin Mary to celebrate the Christmas season this year. Maybe Brother Rice administrators have an extra that they can spare? Anyone feel like constructing a golden calf? Sounds like Brother Rice has the furnace stoked and will help facilitate your smelting needs.

Look, I understand the challenges. It's tough delineating between what is equal versus free in the best of circumstances, and there's a delicate balance that must be sought between your right to worship and my right to worship if we're going to make this amendment-thingy work.

I do promise, however, that the balance does not begin with the thesis statement, "All religions are philosophically equal." That's the theory that the pushovers at Brother Rice in Michigan have inadvertently advanced through their accommodations to the practice of Islam within their Christian school. Religions and especially religious schools have every right and obligation to claim moral authority over competing religions and to prohibit the practice of rival faiths within their privately owned spaces.

Neither should the aforementioned thesis statement on balance begin, "All religions shall achieve equality through equal censorship," as is supported with a growing number of bans to any public religious expression at universities or other public institutions throughout the country. When the First Amendment was ratified, do you suppose it was done with the intention of promoting free religious expression through incremental gag orders?

Congress shall make no law respecting an establishment of religion, or prohibiting the free exercise thereof; or abridging the freedom of speech, or of the press; or the right of the people peaceably to assemble, and to petition the Government for a redress of grievances.

No. No protection from exposure to oppressive Judeo-Christian hegemony that I can see. Ah. But I guess it would have been in there if the Founders had lived to see how judgmental Christians can be? You know, like the Second Amendment…they would have put more restrictions on gun ownership if they had anticipated that there would one day be terrorist attacks on Christmas parties or gangsta drive-bys in da hood.

And lastly, religious balance cannot be achieved by removing the right to expression of a majority faith by a secular institution while allowing other faiths to quite literally proselytize and recruit without reciprocal accommodations to the majority. If we're going to have "Walk a Mile in Her Hijab" day at Vernon Hills High School, then will the school administrators please let me know when I might show up with my rosary to instruct students on the patience and virtue that Christian prayer promotes? "Walk a Mile Counting Some Beads" so to speak? It's Advent after all. No time like the present.

Last I checked, Christianity is the majority religion in this country. I know that the concept might seem increasingly foreign while this tyranny of the minority effects mass amnesia on a cowed populace, but the right of expression by the majority is as equally sheltered under the First Amendment as it is for any other minority faith.

Take it a step further then. My responsibility to protect your religious expression does not include the mandate that I view your belief as equally valid. I am a Christian. By definition, I believe that any worship that is not Christian is invalid. I'm sorry if this offends you. That belief in the fallaciousness of other faiths includes Islam by the way, and I am not under any obligation to elevate what I believe is false worship to the moral equivalence of Christianity. If you follow Islam, I think you're wrong. I'll defend your right to be wrong, but not by integrating your values into my core beliefs.

Protection of your rights means that I'm simply not permitted to stop you from worshiping openly as you see fit. Christians ought to be placed on the endangered species list, because they are currently being hunted out of existence. Until we get a grip on the limits and protections of the First Amendment, I can't see how that's going to change.