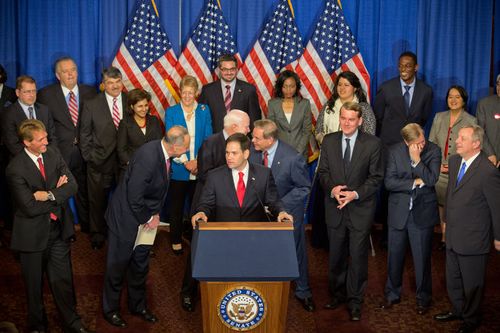 Marco Rubio and the Gang of Eight

Despite my unwavering support for the 2nd Amendment, and my habit of checking the voting records on that issue of every candidate from Assistant Dog Catcher to President of the United States, I have never been a single issue candidate; that is, until now.

The issue of amnesty, and the related issue of the "refugee" invasion that the Obama Regime has quietly been engineering under the radar, is an existential issue for this nation. As you no doubt realize, Obama's plans to "seed" the country with "refugees," who are actually economic migrants, and to facilitate the transformation of the demographics of this country with his lawless pen-and-phone amnesties, are designed to enhance the political fortunes of Democrats for the next fifty to 100 years, national security and impending fiscal disaster be damned. It's very cynical and dangerous, and I'm sorry to say that Sen. Marco Rubio is not part of the solution. He is part of the problem.

Tuesday's CNN GOP debate did nothing to reassure me about Sen. Rubio's position on this critical issue. He seems to be the same guy who was ready to go to conference with Obama's henchman Sen. Chuck Schumer, where he would surrender the country. What a huge mistake that would have been!

I was grateful that Sen. Ted Cruz busted Sen. Rubio on this issue during the recent CNN GOP debate, however, a debate is not the appropriate forum for actually exposing just how bad the Gang of Eight bill that Marco Rubio wanted is for this country. Here are just three highlights, or I should say, low lights:

Before he flip flopped on amnesty, back when he was trying to pass the Schumer-Obama amnesty bill, in April 2013, Sen. Rubio said “They will have to come forward and pass a rigorous background check. … If they’re criminals, they won’t qualify.” Uh, not exactly.

The statute creates a new status called "Registered provisional immigrant status," which basically granted these illegals the right to be legalized BEFORE border security was implemented.

Except as provided in subparagraph (B), an alien is ineligible for registered provisional immigrant status if the Secretary determines that the alien—

(i) has a conviction for—

(I) an offense classified as a felony in the convicting jurisdiction (other than a State or local offense for which an essential element was the alien's immigration status, or a violation of this Act);

(III) 3 or more misdemeanor offenses (other than minor traffic offenses or State or local offenses for which an essential element was the alien's immigration status, or violations of this Act) if the alien was convicted on different dates for each of the 3 offenses; (emphasis mine)

So, if an alien is convicted of three offenses on the same day, which is pretty typical (think drunk driving, vehicular manslaughter and impersonating a woman from Caitlyn/Bruce Jenner's accident, for example), that counts as one offense for purposes of this statute, which means they are not disqualified from the special status created by the bill.

Juan-Francisco Lopez Sanchez, a felon with multiple convictions and five deportations under his belt, admitted to shooting Kathryn Steinle dead at Pier 14 in San Francisco and says he came to work in that city because he knew that he would not be deported, crimes and illegal status notwithstanding.

Had the Gang of Eight measure become law, not only would it have allowed sanctuary cities to continue to refuse to cooperate with immigration authorities, it would have stopped ICE from pushing to strip federal funds from sanctuary cities that defied them by releasing aliens back onto the streets, thanks to an amendment added by California Sen. Dianne Feinstein (D-CA).

Suffice it to say that Sen. Rubio has some 'splainin' to do on that one.

Along these lines, pay very close attention to this quote from Senator Marco Rubio — one of the pro-reform Republicans on the “gang of eight” — in which he strikes a very careful balancing act. The quote comes in an interview with Univision:

I have just scratched the surface when it comes to how horrible this Gang of Eight bill really was, and I don't think Sen. Rubio has been seriously questioned about how he could promote such a steaming pile of legislative mess.

Sen. Rubio is the understudy for pathetic Jeb (or do you say 'Jeb!'). When Jeb's Chamber of Commerce donors finally persuade him to accept the inevitable and drop out, they will turn their support to Marco Rubio.

Fellow Patriots, we need to understand that the stand in is not much better than the original because he has not affirmatively reversed his position on the existential issue of the invasion of our country.

Isn't it interesting that Fox News, the network that has been in the tank for Jeb from the jump, hasn't found the issues of Rubio's support for the Gang of 8 bill, and the substance of the law, the least bit interesting?

By the way, did you know that over 100,000 "Syrians" have been admitted to this country under the radar? Are you getting fed up yet?

Daring to Commit Common Sense, Fearlessly, and More Important, Cheerfully, in the Age of Obama.

Listen any time on demand at teriobrien.com to not only the last episode of the show, but the archive, going back to June 2014.

As one listener wrote “one of the most insightful and entertaining pundits in America. Also, her voice is magical.”