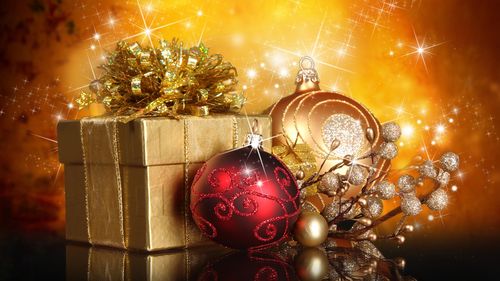 Jonah Goldberg has written an article posted on NRO entitled, "But there's more than one front in the 'war on Christmas.'" His thoughts about attacks on public displays of Christian values are especially useful for understanding this phenomenon because Goldberg wasn't raised in a Christian household but celebrates Christmas mostly in recognition of his mother's Presbyterian background.

"While it's absolutely true that there are sincere and committed Christophobes and joyless atheistic boobs out there, one of the major culprits is capitalism itself. I like capitalism — a lot. Heck, the best Christmas present I could get would be a Scrooge-like conversion on the part of the president after a visit from the Ghost of Socialism Past. But the downside of capitalism is that it will, eventually, encourage the commercialization of everything sacred."

The piece is well worth considering as our primarily Christian national heritage battles a trend of anti-culture in America that is frankly reminiscent of the Barbarian overthrow of the Roman Empire. Put simply, the reason that Christianity suffers under constant denigration is because Christianity's own laziness and malformation has created a vacuum and invited the challenge.

So let's start by being honest. It's been a hard year for the retailers in terms of the consumer's shopping experience with the wrong kinds of coffee cups and a hesitancy to acknowledge why there are so many shoppers in their stores on the day after Thanksgiving…almost painful to watch, really.

It's a "damned if they do, damned if they don't" left-right combination on how to close out individual transactions without setting off an interest group on a tirade that could ultimately hurt corporate reputations. With the first punch, companies have been trained through a misguided celebration of Christ's birth to rely on Christmas consumption and exorbitance that is ultimately the antithesis of Christian values in order to make their annual goals.

I'm with Jonah Goldberg on this one. I like capitalism. I like free markets. I have no problem with consumption even at Christmas time. The growing problem I see with our changing attitudes toward Christmas stems from the fact that Christianity – as a moderating force on behavior – has dropped the ball in defining its celebrations as sacred and has allowed it to become about anything but Christ.

Ask a stranger to tell you what the meaning of Christmas is. I'm willing to bet that more than half of the time, you'll get the wrong answer. To a growing majority of people, Christmas is simply a bi-product of the peace movement. Christmas is a time when we lay down our differences, shed our prejudices and perform acts of charity and giving. Right? Who can argue with that logic? These are all noble ambitions…at least on paper, and since they're theoretically noble, this must be what Christmas is about.

So let's do ourselves a favor and not have the easy discussion of what Christmas actually is as our main goal today. Instead, let's talk about this second punch of why Christianity's misdirection on Christmas has led to the degradation of Christianity itself. Take this joyful Christmas carol as a for instance:

Oh at Christmas time, it's hard, but when you're having fun

There's a world outside your window

And it's a world of dread and fear

Where the only water flowing is the bitter sting of tears

And the Christmas bells that ring

Are the clanging chimes of doom

Well, tonight, thank God it's them instead of you

Allow me to paraphrase if you will…You're having fun celebrating Christ's birthday. You are selfish to have fun when there are other people who are suffering. Give to our organization to relieve your heavy conscience, and we will get the money distributed on your behalf after, of course, paying ourselves first. Oh, and you should offer a prayer of thanks to God that someone else is suffering in your place.

Frankly, I've never been able to wrap my head around the Christmas bells of doom part…poetic though it may be, and "there won't be snow in Africa," I've always thought was a little disingenuous since freezing temps would only exacerbate the suffering of people with no food. "Do they know it's Christmas?" …probably not since their Muslim overlords would behead them if they did. And the relief that has been sent on behalf of Band Aid has only helped and continues to help to feed the overlords and perpetuate the problem every time the song is played on the radio.

But bottom line? Ick. How this self-loathing, anti-Western pabulum passes for Christmas music, I simply do not know. The very existence of this nonsense without a full-on defense of Christianity in rebuttal is what brings us to a guilt-ridden holiday where the fictitious holiday of Festivus seems like the best alternative to celebrating the birth of Christ the King.

Walk through the steps. You bought the song hoping to end suffering for people who have less and as a gesture of Christmas charity where we lay down our differences and come together in this time of peace and love.

Purchasing the song didn't do anything but add to the misery and the reputation for flippant consumerism that Christmas has gained.

You're still to blame for the world's problems. You still have no right to a moment of joyful celebration while people suffer in the world. The Christophobes and atheists – as Jonah Goldberg calls them – who actually perpetuated the materialism through the sleight of hand songs and charities such as I have referenced – now point to this charitable sloth on what looks like the moral high ground because you farmed out your charitable works to a bunch of socialists.

And this blitz on Christianity will not end until Christians go on the offensive by embracing the sacredness of our 2000-year-old history. Look, Baptists may not have everything in common with Presbyterians. Catholics may have theological differences with Lutherans, but I submit that as a whole, we have a heck of a lot more in common with each other than we do with the alternatives. We can and should represent our disagreements with one another with the dignity and grace that the discussions deserve.

Those incongruities are absolutely important and worth hashing out, but we should also remember that together, Christians are a force with which to be reckoned and that force is what will set even the corporations free as they worry nevermore over "to Merry Christmas or not to Merry Christmas."

As a faith, we can make that choice obvious to our corporate friends…not through our indignation over coffee cups which is quite after the fact, but through our spiritual formation and our constant confidence that Jesus is the only reason for the season.

By Paul Schimpf, Guest ContributorOn Friday, January 27th, the...
Previous article
Weyermuller: Politics, Nativities, Camels, and A Charlie Brown Christmas 2015
Next article
A Pause to celebrate the Birth of the Christ Child