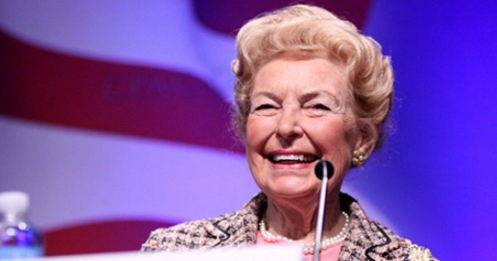 ST. LOUIS – A mini-mutiny appears to be developing over GOP presidential picks, as 20 state leaders of the conservative Eagle Forum line up behind U.S. Senator Ted Cruz after the network's founder Phyllis Schlafly indicated support for businessman Donald Trump.

“Trump is the only hope to defeat the Kingmakers,” the 91-year-old founder of Eagle Forum said last week. “Because everybody else will fall in line. The Kingmakers have so much money behind them.”

But in a rare move of independence from Schlafly's leadership, 20 state leaders released a letter endorsing Cruz. Cruz responded to the move with careful respect for Schlafly.

“I am honored to have the support of so many Eagles, at the grassroots and all across this nation,” Cruz said. “Phyllis Schlafly has given me much good advice over the years, and I admire the courageous grassroots activists who are carrying on her great work. Our nation is indebted to Eagle Forum for their conservative leadership, now in its fifth decade. Eagle Forum understands the unequaled power of the American people when they rise up against the Washington cartel and in defense of our nation’s founding freedoms.”

A key Eagle Forum supporter for Cruz is Texas leader Cathie Adams. Others longtime, influential activists that signed the letter include Schlafly's niece and heir apparent Anne Cori, Missouri's state leader, as well as Eunie Smith from Alabama, Gayle Ruzicka of Utah and Sandy McDade from Louisiana. They wrote:

Among the Republican candidates, Ted Cruz stands out. His courageous conservatism is indisputable. As Solicitor General of Texas, he successfully protected the Ten Commandments and the Pledge of Allegiance. He stood up for veterans’ free speech rights. Ted Cruz defended religious liberty in public schools, the workplace, and the church. Ted Cruz’ resume is just as remarkable as his courage: Cruz does not simply choose the right side in the battles that matter: he leads the battle to victory.

As a United States Senator, Ted Cruz has led the fight against Planned Parenthood and Obamacare. He has defended marriage, opposed judicial activism, exposed Common Core, and worked to secure our border. He has eloquently defended our freedom of speech and 2nd Amendment rights.

The Washington cartel has betrayed the American people. Too many Republicans have abused the trust of conservatives. It is time for conservatives to claim our nation for liberty and to restore opportunity: as Ted Cruz says, to reignite the promise of America.

Ted Cruz embodies Eagle Forum’s mission: “to enable conservative and pro-family men and women to participate in the process of self-government and public policy making so that America will continue to be a land of individual liberty, respect for family integrity, public and private virtue, and private enterprise.“

And in closing, a bit of defiance showed in the letter, when the group mentioned the word "echo," alluding to Schlafly's conservative movement best seller in the early 1960s, "A Choice, Not an Echo":

With this in mind, we, the undersigned Eagle Forum state leaders, enthusiastically endorse Ted Cruz for President of the United States. From the grassroots up, we will work to ensure his victory: Ted Cruz is our choice, and we refuse to be an echo.

Schlafly's high esteem for Donald Trump is matched by conservative political pundit Ann Coulter and rumors are Sarah Palin could officially be joining their ranks as soon as Tuesday.