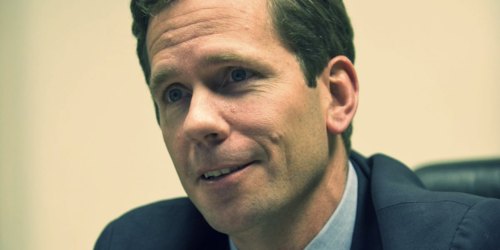 In an unsavory desperation move, Mark Kirk-wannabe Robert Dold, who ill-serves the 10th Congressional District in Illinois, has the dubious honor of being the first and so far only Republican to support the anti-liberty, pro-sexual deviance bill dishonestly titled the “Equality” Act.

The pro-“LGBTQQIAP” magazine the Advocate openly admits and celebrates the stunning ramifications of this bill:

The Equality Act would include protections in public accommodations, public education, employment, housing, federal funding, jury service, legal protections, and credit. The bill would also clarify that the Religious Freedom Restoration Act cannot be used to defend discrimination against LGBT people. The proposed legislation also clarifies that sex-segregated facilities must admit individuals in accordance to their gender identity….[emphasis added]

You read that right. This federal bill would legally mandate that perverse sexual desires nullify religious liberty—the liberty upon which this country was founded.

This is the same Robert Dold who during his first and short-lived congressional career opposed a bill that would have banned sex-selection abortions. This is what I wrote at the time about his intellectually and morally vacuous position:

Rep. Dold has the audacity to call himself a moderate while being one of only seven Republicans in the U.S. House to vote against the ban on sex-selective abortions (Prenatal Nondiscrimination Act). That’s right, folks, Dold defends the “right” of a woman to kill her unborn baby for no reason other than that the baby’s biological sex doesn’t happen to suit her fancy. If Dold had any bona fides with women, surely he should have lost them when he cast that morally repugnant vote.

Illinoisans concerned about the apparent lack of sound moral reasoning can rest assured, however, because in a statement Dold shared how deeply offensive he finds sex-selective abortions:

Abortions based on gender-selection are reprehensible, but federal legislative intervention and criminalization of this decision is not the proper approach to addressing gender discrimination. These are serious issues, particularly in some foreign countries, but today’s legislation would obligate American doctors to police and report “thought crimes” in the women they serve and would put the federal government between the doctor-patient relationship.

Dold asserts that this law “would obligate American doctors to police and report ‘thought crimes’” to authorities, even though the bill did not obligate doctors to even ask about a mother’s motivation for terminating the life of her gestating baby. The law would have prohibited doctors from “knowingly” performing “an abortion…based on the sex, gender, race or color of the child….”

Dold finds the prospect of the federal government getting in between a doctor and patient more reprehensible than doctors getting in between an unborn baby and her unalienable right to life. I wonder if Dold objects to laws prohibiting physician-assisted suicide, because such laws “put the federal government between the doctor-patient relationship.” Of course, there are differences between the two situations: in the case of physician-assisted suicide, all parties directly affected are able to offer their consent. Wouldn’t the reprehensible act of taking the life of someone who cannot offer consent justify at least the same degree of legislative intervention?

While Dold believes that “Abortions based on gender-selection are reprehensible,” he also believes that “federal legislative intervention and criminalization…is not the proper approach to addressing gender discrimination.” Seriously?

Here are some examples of federal legislation that address gender discrimination, the absence of which laws, however, will never result in the death of a human being:

Title VII of the Civil Rights Act of 1964 (Title VII), which prohibits employment discrimination based on race, color, religion, sex, or national origin

The Equal Pay Act of 1963 (EPA), which protects men and women who perform substantially equal work in the same establishment from sex-based wage discrimination

Title II of the Genetic Information Nondiscrimination Act of 2008 (GINA), which prohibits employment discrimination based on genetic information about an applicant, employee, or former employee

The Civil Rights Act of 1991, which, among other things, provides monetary damages in cases of intentional employment discrimination

The Equal Credit Opportunity Act, which prohibits creditors from discriminating against credit applicants on the basis of race, color, religion, national origin, sex…

The Fair Housing Act, which prohibits discrimination in the sale, rental, and financing of housing based on race, color, national origin, religion, sex…

Just how immoderate and incoherent is Dold? Here’s what Laura Bassett wrote on the Huffington Post about Dold:

Planned Parenthood does not have many GOP friends in Congress, but one rare, pro-choice Republican in the House of Representatives stuck his neck out on Wednesday and announced his plan to protect the family planning provider from his party’s political attacks.

Let me understand this: Dold is a pro-choice Republican who finds nothing problematic with using public money to fund the chief provider of abortion in the country and yet he wants the public to believe he finds sex-selective abortion “reprehensible”? Yeah, right.

With Dold’s endorsement of the anti-liberty “Equality” Act, we now know that Dold is no friend of religious liberty either. Conservative Illinoisans in the 10th Congressional District need to do what Princeton law professor Robert George has recommended in such situations:

The partisans of abortion and marriage redefinition have a lock on the Democratic Party now. Effective dissent of any type is not possible. Having gained that lock on one party, they are now turning their resources and attention to weakening the pro-life and pro-marriage reality witness of the Republican Party….I can think of no more urgent priority than preventing that from happening. Maintaining and solidifying the pro-life and pro-marriage reality stance of the Republican Party is critical. That’s why tactical voting, including voting for bad Democrats over bad Republicans, is IN CERTAIN CIRCUMSTANCES (e.g., where the election of a Democrat does not jeopardize Republican control of a legislative house), morally legitimate and perhaps even advisable. We must not let the pro-abortion and pro-marriage redefinition movements strengthen their positions in the Republican Party.

Please vote in such a way as to ensure that Dold does not get re-elected. It’s critical that he not be allowed to do further damage to the cause of life, religious liberty, the health of the republic, or the integrity of the Republican Party. If Dold loses and the GOP knows the reasons for Dold’s loss were his morally degenerate views on critically important social issues, they just might start seeking and funding better candidates. And then the GOP can demand that socially “progressive” Republicans hold THEIR noses and vote for those better candidates.