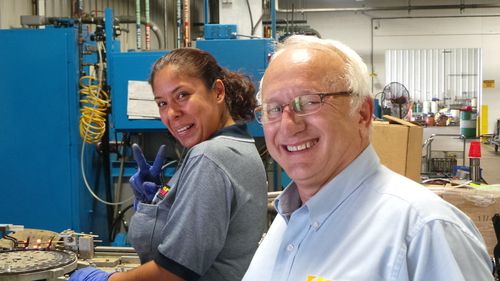 CRYSTAL LAKE – When you drive safely from one place to another without problems with your car’s wheels, you’ve personally experienced the value of induction heat treating – whether you know it or not.

That’s the kind of work Haimbaugh and the near 60 members of the IHT team do everyday inside the walls of their 35,000 square foot building in Crystal Lake, Illinois.

IHT offers a variety of services, including induction hardening, case hardening, tempering, annealing, and brazing, as well as shrink fitting. They make

“I’m proud of what we do here.  We run a lot of work in this building and we rarely have anything come back,” he said. “Our quality control department is the best around. If an order doesn’t meet specifications, it doesn’t go out the door.” Last year, IHT ran 10,000 orders and had a mere five returnor repair. IHT’s busy shop that runs around the clock is in a constant state of tear down and set up.

While IHT does work for several industries, much of what they do is for the automotive industry – and that’s a sector that is keeping IHT particularly busy.

“Automotive is extremely strong right now,” Haimbaugh said. “I believe in the last quarter, more cars were sold than any quarter since 2005.”

Dave Haimbaugh assumed the role of IHT’s CEO when his older brothers Kurt and Richard retired. The three of them assumed the company leadership when their father – who founded the company in 1946 – retired in 1978.

At that time, the youngest Haimbaugh returned to work at IHT. He remembers coming to work with his dad when he was a little kid.

“I remember being six years old, being led into the back of the plant and being shown a basket of small gears,” he said. “My dad said ‘Here’s your game – put these gears on these nails until you can’t stand them up any higher.’ “

Haimbaugh said that even being so young, he figured out what he was doing wasn’t a game – he was helping the family business.

Since that time, Haimbaugh says that he’s worked in every one of the company’s departments, and is familiar with the work each one does.

Last December, the company leadership started including IHT’s whole team in planning and making them aware of what it takes to keep a company productive and profitable.

“We run an open book model,” an idea introduced by TMA member Tasty Catering, Haimbaugh said. “It’s called the ‘Great Game of Business.’ We want our people to know what it takes to run a business. They’re finding out that sometimes it isn’t so easy.” They began setting aside a short period of time every Wednesday morning and afternoon for the company employees to gather in a huddle and review on a large white board the income statement and the balance sheet.  They discuss how much projects are costing and whether they’re reaching expectations.

Like other manufacturers, one of IHT’s biggest challenges is keeping costs down.

“Controlling costs is a real challenge. Contrary to printed reports our government makes, we don’t have a Swiss bank account,” he said. “The cushion is very thin.”

IHT does a lot of their own in-house employee training, and they work hard to keep equipment producing – two other areas that can make company owners lose sleep.

During the 2008-2009 recession, like a majority of fellow manufacturers, IHT was forced to layoff 40 percent of their team. But because of prudent decisions, they survived and are now busier than ever.

“I just want people to know that we’re here,” Haimbaugh said. “We’ve been told that we should get the word out about what we offer.”

When he’s not at IHT, Haimbaugh has a real passion about outdoor sports – especially winter sports. He has two Huskies that he’s trained to pull him on cross-country skis – a sport called ski-jouring. When snow is on the ground, Haimbaugh can often be found at McHenry County’s Glacial Park, giving his dogs a workout.

In the fall, Haimbaugh makes cider from his 50-tree apple orchard.

In the summer, he enjoys taking rides on his British Triumph through Wisconsin and northwestern Illinois.  The day TMA visited, Haimbaugh’s shiny cranberry red bike was parked in front.

“I especially like the British because they gave me three things I adore – the Beatles, motorcycles and my wife Lynda,” he said.

Haimbaugh said that he expects the leadership team at IHT to keep the company going strong when he retires – but that won’t be too soon.

IHT Corporation is located in Crystal Lake, Illinois or on the web atwww.ihtcorp.com .

Used by permission of Technology & Manufacturing Association in Schaumburg, Illinois