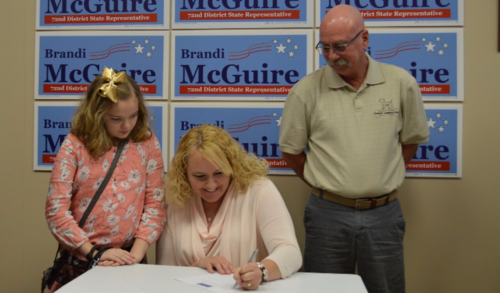 MILAN - One of the two Republican candidates seeking to be the GOP's nominee to fill retiring State Rep. Patrick Verschoore's 72nd District seat signed a "Contract with Illinois families" this week.

"This isn't about me, this is about Illinois, McGuire told supporters at the Rock Island County GOP headquarters in Moline. "I'm running for office because I love my home state, and I think we can do a lot better."

In the Contract with Illinois Families, Brandi McGuire of Milan said she will:

"I have seen first-hand how poor constituent services from a state representative can impact Illinois families," McGuire said. "I was ignored when I went to government leaders for help, and I know I'm not alone."

McGuire challenged others competing for the 72nd House seat to sign the contract as well. There are four Democrats vying for their party's nomination, and two Republicans. The party nominee's will be chosen by voters on March 15th, 2016 and the party nominees will face off in the General Election in November.