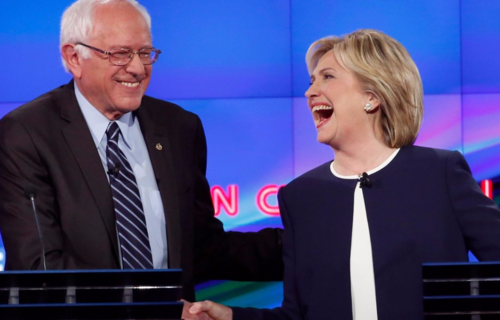 WASHINGTON – Although Democrat presidential candidate Bernie Sanders says he doesn't want to hear any more about Hillary Clinton's d*** emails, the legal group Judicial Watch is continuing to dig and push for more records. Evidently, there's much more to be found.

The group's president says they were astonished to be informed Monday that the Obama State Department recently found “thousands” of new records from Hillary Clinton’s tenure as Secretary of State.

"This latest find of Clinton records, at this late date, is astonishing," Judicial Watch's president Tom Fitton said. "The State Department waited to last possible moment, as it did with the Clinton emails, to tell Judicial Watch and the federal courts about thousands of records that haven’t been searched, as the law requires.  Who knew what – and when did they know it – about these new Clinton documents?"

According to information provided by various Justice Department attorneys, Judicial Watch reports the new documents appear be “working” records in electronic format located on both “shared” and “individual” drives accessible to or used by persons identified as being relevant to the legal group's Freedom of Information Act (FOIA) lawsuits on the Benghazi scandal and controversies from Clinton’s term at State.

The State Department confirmed the new find in a court filing late this past Friday in a FOIA lawsuit concerning records about Clinton aide Huma Abedin:

After State filed its motion for summary judgment in this case [on November 11, 2015], State located additional sources of documents that originated within the Office of the Secretary that are reasonably likely to contain records responsive to Plaintiff’s request.  State has informed Plaintiff that it intends to search these locations, produce non-exempt portions of any responsive records, and file a supplemental declaration in support of its motion for summary judgment (which is presently stayed).

The State Department seeks at least until February 1 to provide additional information about these new records.