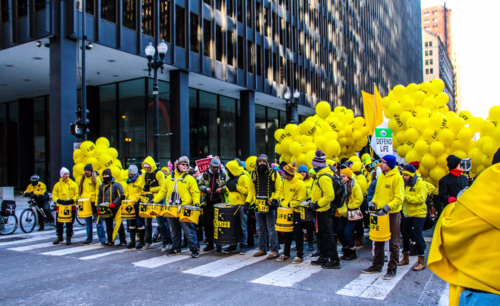 What a feather in the cap for pro-life supporters!  Busloads arrived from surrounding states, five alone from neighboring Wisconsin, to join with fellow pro-lifers on Sunday, January 17, for the 2016 11th annual “March for Life Chicago” on Chicago's Federal Plaza to proclaim the sanctity of human life and to call for the overturn of the 1973 Roe v. Wade decision that legalized abortion in the United States.  Despite the extreme cold (-15 degrees wind chill), over 5000 pro-life advocates filled Federal Plaza.

My participation in “March for Life Chicago” began when I boarded a bus at Marytown in Libertyville, arranged by Lake County Right to Life based in Grayslake, IL. The pro-life organization is headed by Bonnie Quirke.  Accompanying me were the three oldest children (eight in all) of a Christian, home-schooled, pro-life family from Wauconda, Illinois.

Arriving at Federal Plaza, there was an eagerness to get involved, for across Dearborn, already gathered, could be seen a large congregation of pro-life individuals, many sporting signs.  Even more enticing were the yellow balloons and umbrellas dotting the landscape which added a festive aura to the pro-life celebration. Participation, however, was momentarily delayed, for upon stepping off the bus, riders were greeted by members of a pro-choice rally. The number of abortion activists was woefully small (although loud) in comparison to the crowd of pro-lifers assembled across the street.  Also noted was that the abortion supporters didn't have the fortitude or the drive to withstand the bitterly cold weather. They soon abandoned their quest to shout down and embarrass the massive delegation of pro-lifers. Chicago policemen were on hand to insure that none of the pro-life protesters crossed over Dearborn to Federal Plaza Square.

Crossing over Dearborn to join the throng of hardy, dedicated pro-life individuals filling the Plaza, it was heart-warming to see the strong support present from college students and young adults. Might this bode well for the future? Emily Zender, Executive Director of the Illinois Right to Life and President of the March for Life Chicago, welcomed the crowd. She thanked all for coming, lightheartedly acknowledging their commitment as "pro-life popsicles," further acknowledging that because of the frigid temperature the scheduled speakers would practice brevity in their comments. Ms. Zender shared how she wants every woman and man in an unplanned pregnancy to know that no matter what obstacles they may be facing, the pro-life family is there to support them, comments which tied in with the theme of this year's march, "We Are Family."

The Right Reverend Paul (Gassios), Bishop of Chicago and the Midwest Orthodox Church of America opened the event in prayer.

Bundled up in an effort to help ward off the -15 degree wind chill with scarves, hats, earmuffs, and gloves — which turned out to be an almost impossible feat for participants — the first speaker of the afternoon nevertheless received a warm response, Reverend Corey Brooks, pastor of New Beginnings Church of Chicago.  His message was geared toward the African American community. Despite 12.6% of the population, this is where 30% of all abortions occur.  Pastor Brooks called on Planned Parenthood to stop the targeting of African American communities.  62% of their facilities are placed within walking distance of the African American people.  Passionate words from Pastor Brooks conveyed how “Black lives matter – All lives matter -Baby lives matter.”

A very moving testimony was given by Jessica Lowen, pregnant at 19, whose "well-planned out life" was disrupted by a pregnancy. Jessica explained that her now-regretted abortion did not change the fact that she became a mother of a child that died through abortion.

Chicago's Archbishop Blaze Cupich was again featured after his 2015 Chicago debut.  He is Chicago's highest ranking Catholic.  As to why the event is held in Federal Plaza, Archbishop Cupich intoned:  "Abortion is a federal (national) issue and not just about Chicago."  In speaking about protecting life worldwide: "The womb should not be their tomb.  Life is given by God and not by us."  In speaking to the Federal government: “Make room for children in the world."

The Archbishop drew laughter with his remark making light of the cold:  "This isn't cold, it's Chicago."  Cupich then contrasted the bitter cold weather with the warmth felt in the hearts of those gathered for the unborn child.

My ears perked up when I heard the name of the next speaker, Dan Kulp, who was presented as a comedian and author. Dan is also the pastor of the First Baptist Church of Manchester, near Rochester, New York. Why my interest?  My maiden name is Kulp, which is representative of a Pennsylvania Dutch heritage.  Might there possibly be some ancestral connection?  Dan Kulp cracked jokes but was serious about why he and his wife have adopted three children with special needs, which included the first child ever adopted out of China having Down syndrome.  Dan and his wife Elizabeth now have a child of their own, little Emily, making them parents of four wonderfully enthusiastic children.  Cited was Kulp's newest book, Confounding the Wise, published May 8, 2015 by WordCrafts Press.  Other books by Dan Kulp are Relationships and Family and Children with special needs. Children with special needs are not always given to those who are both willing and able to meet their needs. Kulp urged those gathered not to overlook the joy of adoption.

In a show of bi-partisan unity, Congressmen Randy Hultgren (R-IL) and Dan Lipinski (D-IL) took the stage together to affirm their pro-life positions.  Hultgren invited those who might be attending the national “March for Life” in Washington, D.C. this Friday, January 22, to drop by his office. "We are created in God's image.  Life is precious and valuable.  Our first right is embracing the value of life.  Fight for justice. Be there for the unborn."  Hultgren then read this verse from Proverbs 31:8 (NLT), titled "Wisdom Calls for a Hearing":

Listen as Wisdom calls out!  Hear as understanding raises her voice! On the hilltop along the road, she takes her stand at the crossroads. By the gates at the entrance to the town, on the road leading in, she cries aloud, “I call to you, to all of you!"  I raise my voice to all people. You simple people, use good judgment. You foolish people, show some understanding.

Abortion survivor Melissa Ohden had a powerful story to tell, having the opportunity to be on stage only because she had survived abortion. Melissa’s biological mother was a 19 year-old college student when she had a saline infusion abortion in August of 1977 that was meant to end her life.  Although Melissa's  biological mother thought that she was less than five months pregnant when she had the abortion, the fact that Melissa survived and weighed almost 3 pounds indicates that her biological mother was much further along in her pregnancy than she realized.  For five days Melissa fought for her life in her mother's womb, surrounded by a salient infusion that was meant to scald her to death from the outside in. The intention was for her life to end.  Melissa charged that what was done to her mother was likewise horrible.

In a declaration meant for all, Melissa expressed the thinking of all gathered with these words: "We are pro-life, we are pro-baby, we are pro-woman, and we are pro-love."  Listen here to Melissa Ohden's testimony in front of Congress on September 9, 2015.

Students for Life Illinois Student Leader from DePaul, Eareen James Yambao (called EJ), mused how abortion had taken one of four from his generation.  After recounting his story of how his sister became pregnant at an inconvenient time, decided to have her baby, and how he is now the proud uncle of a one-year-old boy. "EJ" headed and led the March for Life from Federal Plaza past Chicago City Hall and the Illinois State Building, a route that  represented the three levels of government being urged to restrict abortion:  federal, state and municipal. With a sea of yellow balloons, yellow umbrellas, and signs with various pro-life messages from diverse groups representing multiple church denominations and a variety of college campuses that came together. They were from across Illinois, Wisconsin, Indiana, Michigan, Iowa, and Ohio. An estimated 5000 pro-lifers walked through the Loop in a procession that stretched for blocks, exhibiting pride and warmth for the unborn, at least in their hearts.

Chicago Bear owner Pat McCaskey spoke at the official after party at the Sidebar Grille.