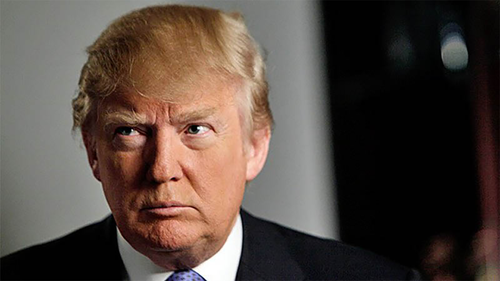 By Nancy Thorner and Elvira Hasty -

The Republican Establishment has become unhinged on its hatred for Donald Trump.  As Steven Simpson mused in his December 14, 2015 American Thinker article, "Donald Trump: Right as Usual:"

At this juncture, the election is almost a year away.  Much will occur in that period.  One thing is for sure:  Donald Trump is his own man, and as long as the Man Upstairs protects him from all his enemies, he is not going away.  The political elitists of both parties have better accept it.  Perhaps the Silent Majority is indeed back again.

This article by Kelleigh Nelson dated October 27, 2015, "Why the GOP Establishment Hates Trump", gets down to the nuts and bolts of why Trump is so despised.  It's because "he's thrown a money-wrench into the plans of the New World Order." (To understand the NWO, read Dr. Dennis Cuddy's chronology of same.)

Kelleigh goes on to say:

Who would have thought that an outsider, like billionaire Donald Trump, would capture the attention of the American people, and at the same time, infuriate the GOP, DNC, and MSM, but mostly his own party!". . . . Trump stands for "the opposite of what the New World Order gang wants! And that gang includes both the left and the right, and has for over 50 years now. Without Trump in the race, the Globalist, Wall Street, Corporate Media and RNC/GOP delivery of Jeb Bush would ultimately be the outcome. So, Mr. Donald Trump has struck fear in the hearts of the elitist globalists, and Donald is beholden to no one…not one special interest, nope, not one.

The criticisms of Trump are amazingly missing something. They are lacking in negative stories from those who work for him or have had business dealings with him. After all the employees he's had and all the business deals he's made, there is a massive void of criticism. In fact, long term employees call him a strong and merciful leader and say he is far more righteous and of high integrity than people may think.

It is indeed appalling how much time and energy is spent denouncing Trump and trying to make him look bad. They keep talking about Trump’s rudeness but not a word about how others have insulted him.  Jeb Bush called Trump a jerk.  For someone at 3% in the polls, he should instead stop insulting the over 30% who choose Trump and re-evaluate his candidacy. It tells me these individuals care more for their elitist positions in D.C. than for their country and the American people.

"Intellectuals" and their ill-advised Trump Fury

Fox News likewise spends more time bashing Trump than exposing Obama and Hillary for their treason. It happens with the 6:00 p.m. news (EST) with Bret Baier and his crony panel and old timers Brit Hume, Stephen Hayes, George Will, Charles Krauthammer.  Fox News even wants to bring Megyn Kelly back to its final presidential debate as moderator. Really?  We have likewise seen a real effort to trash Trump in Pajamas Media, particularly by Roger Simon and lately by Victor D. Hansen, who should stick to history. “Intellectuals” think trashing Trump elevates them because Trump refuses to be PC like they are.  Might intellectuals even be considered losers who have never contributed to any good thing in our society?

Donald Trump has provided jobs for many people, who then pay taxes and raise families.  This benefits our country. Intellectuals, on the other hand, write and espouse and comment but don’t create jobs for anybody else except themselves. Their jobs often contribute little of anything except “entertainment”. Frequently intellectuals cannot even give us straight news; watching the world, as they do, from the inbreeding chit chats at DC cocktail parties.  Could it be that their inner selves tell them how useless their lives have been in the D.C. circle, making their hatred for Trump nothing more than jealousy at a man who has achieved the American Dream.

Recently the label of a dictator has been foisted upon Trump by some writers. Daniel Greenfield excellently explains in his latest blog how this wouldn’t be so out-of-line since for the past seven years this Congress has allowed Obama to trash the Constitution and rule as a dictator.  As Greenfield says:

Regarding the inappropriate dictator label ascribed to Trump, its purpose it to portray Trump as a bully instead of a decisive leader.  In the business world one has to work with several people and be able to delegate in order to be successful.  Perhaps to the media “getting things done” means it can happen only by force, since D.C. seems to be populated by mostly those who talk for a living.

The American people are frustrated with Congress.  The Republican Party has twice been rescued by voters, once in 2010 when they won the House of Representatives, and then in 2014 when the people gave them the Senate.  What has happened since we placed Republicans in charge of Congress?  Obama has been allowed to continue to rule by executive order and obtain every single desire in his progressive agenda with help from a majority of Republicans.  We have had a few loyal conservatives in Congress who have voted against the leadership and have brought hearings on certain scandals, such the IRS targeting of conservatives and the Benghazi crime, but even these conservatives have not been able to accomplish anything other than their NO votes and some eloquent rhetoric against the corruption.

Why is everyone in D.C. so afraid to tell the truth?  Most Americans of average intelligence already know:  Obama and his minions are traitors. Obama dislikes our country.  Obama is a dedicated Alinsky disciple who will never bend our way.  He is also, if not a Muslim, someone who admires Islam and blames the White European Christians for all the world’s inequalities and troubles.  Obama has given us countless unconstitutional decisions that are indeed impeachable, but not one Congressman has ever admitted to it.

Why then do the D.C. elitists wonder what makes Donald Trump so popular?  Trump is the only person in America who tells the truth and is not politically correct, even if it sounds rude to the delicate ears of the GOP establishment.  The authors believe that allowing Muslim refugees into our country, having an unprotected border, helping to establish ISIS in the Middle East, and the nuclear deal with Iran, happen to be much more important to our national security and way of life than how rude a candidate may sound to some when on the campaign trail. Undoubtedly Trump will clean up his campaign-style rhetoric if elected president.

DC elitists, which of course includes the GOP establishment, seem to think that good manners and friendliness are important qualifications for our leaders when negotiating with our enemies.  Remember how George W. Bush kept telling us that Islam was “a religion of peace.” This was the same President who allowed the Clintons’ crimes to go unpunished.  George W's father, G. H. Bush came to adore Bill Clinton. Some have even likened it to a father/son relationship. And what about Jeb Bush?  It was on September 10th, 2013, the eve of the first anniversary of the terrorist attack in Benghazi, that Jeb Bush, as chairman of the board of trustees of the National Constitution Center in Philadelphia, presented Hillary Clinton with that year's Liberty Medal, at which time he offered this laudatory Hillary statement:

Former Secretary Clinton has dedicated her life to serving and engaging people across the world in democracy. These efforts as a citizen, an activist, and a leader have earned Secretary Clinton this year’s Liberty Medal.

Yes, this is the same public service that brought millions of dollars to the Clinton Foundation to sell their country out to our enemies.

Trump Not the Problem, but the Solution to Many Americans

Our Founding Fathers were very intelligent, but they were human.  John Adams had commented that the Constitution was meant for a moral people. That in itself tells us that it then fails to take into account the sinfulness of man.  We now see the emergence of this arrogance and fear of the “DC inner class” (Republican Establishment) to lose their power and prestige under a so-called Donald Trump “dictatorship.”

As was stated by Rush Limbaugh on December 10, 2015 as part of a long commentary:

The entire Washington establish is like a bunch of parents and grandparents, just in absolute shock over what Trump is doing and saying, and they're out there condemning it. But they don't have the moral authority to pass judgment on Donald Trump, or anybody else.  Nor does the media.  They've squandered it all with the majority of the American people.  They have squandered it all with the Republican base.  So deep and wide is this disconnect.

Hear also what Laura Hollis has to say in her Townhall commentary of December 31, 2015, "Understanding Trump":

People are tired of being silenced. A lot of Americans — not just middle-class whites — are tired of being told that their concerns are stupid, that they are racist or sexist or ableist or otherwise biased and should shut the hell up. They have questions. They have concerns. They have opinions; they have something to say. In comes Trump, who says what he thinks, insulated from political consequences by his fortune, and undaunted by the shame-and-blame game that the press has dutifully doled out for years to protect Democrat candidates and whittle the Republican herd. He has thumbed his nose at those who think they control the message in this country; he is speaking for a lot of people, and they are cheering for him.

If you really want to know what Donald Trump stands for and believes, here is an article from Doug Johnson's, Horse Sense blog that spells it out clearly and succinctly, and should make every conservative pleased to have Donald Trump as the Republican Presidential Candidate for 2016.

We the People must rise up in 2016 not only against the political class but also against the media, entertainment, and academic groups that have contributed for years to the decline of our moral values, our Founding Fathers principles and our Judeo/Christian values.  Donald Trump is not our problem.  To millions of Americans he is the solution.

By Illinois ReviewIn a Facebook post on Tuesday, former...
Previous article
After 10 years, IR wishes you and yours a Happy New Year 2016!
Next article
Five questions 2016 Presidential Candidates Should Answer