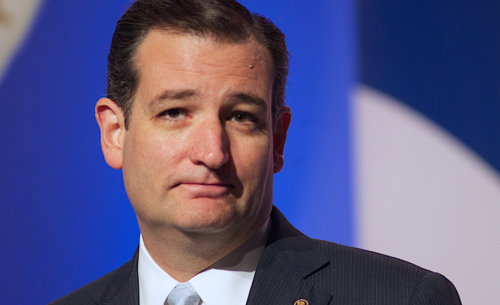 SPRINGFIELD – Two objections to U.S. Senator Ted Cruz being on Illinois' March 15th Republican primary ballot were quietly tossed out Monday while the rest of the world was focused on Iowa and their primary caucuses.

Two Illinois citizens argued that because Senator Cruz was born in Canada, he was not a "natural born" citizen, as candidates for the presidency are required to be by the U.S. Constitution. 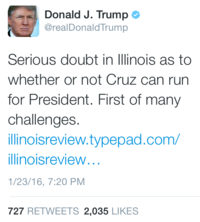 The Illinois objections drew the attention of GOP candidate Donald Trump, who has been raising the question of Cruz' eligibility.

The State Board of Elections ruled Monday that although Cruz was born in Calgary Canada, his mother was a U.S. citizen living in Canada at the time of his birth. Therefore, Cruz is a "natural born" citizen because being born – even outside the U.S. borders –  to a U.S. citizen did not require him having to go through the naturalization process to be considered a legal American citizen.

One objector – Lawrence Joyce of Poplar Grove, IL – represented himself in the hearing, and the Cruz campaign's points were argued by Murphysboro attorney Sharee Langenstein.

In her arguments on Cruz' behalf, Langenstein referred to historic correspondence in 1787 between U.S. Supreme Court Justice John Jay and President George Washington in which Jay suggested that the Constitution include a prohibition against "foreigners" from attaining the position of Commander in Chief.

"The Framers in no way intended to exclude a U.S. citizen at birth from holding the office of President, simply because of where he or she happened to be born. After all, that individual is not a 'foreigner,' but rather a U.S. citizen from birth," Langenstein wrote.

Indeed, she argued, "John Jay would certainly not have held such a view, considering that when he wrote this letter to Washington, he was serving abroad as the Secretary of Foreign Affairs and had fathered three children abroad. Surely Jay did not believe his own children were 'foreigners' constitutionally inelgible to hold the office of President."

The Board wrote in its opinion, "… Ted Cruz was born in Canada to a mother who, at the time of his birth, was a U.S. citizen. Ted Cruz became a nautral born citizen at the moment of his birth because it was not necessary to become a citizen through the naturalization process at some point after birth."

And then wrote, "Further discussion on this issue is unnecessary."

View the Board of Elections discussion in full HERE.