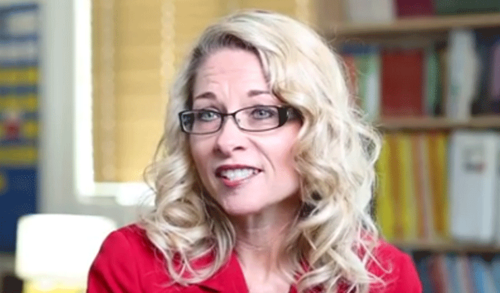 Friedrichs is a California elementary school teacher who chose to take on organized labor.

She didn’t like how a union that she did not agree with was taking money from her paycheck.

Being forced to give money to a group that she disagrees with struck her not only as unfair but as a basic violation of her right to free speech.

For example, she doesn’t like how tenure protects bad teachers. But the California Teachers Association, which she is compelled to give money too, defends tenure.

And she was angered when the union wouldn’t stand up for quality teachers with low seniority when her school district had layoffs.

In half of the states, Friedrichs wouldn’t have to give her union a dime.

But in states like California (and Illinois) that don’t have right-to-work laws, she can be compelled to give a union money just to keep her job.

The situation so angered Friedrichs that she fought it all the way to the U.S. Supreme Court.

I sat in the courtroom and listened as the justices grilled her attorney – and those on the other side. It has the makings to be a landmark case.

And it would appear Friedrichs had a receptive audience.

If the high court rules in her favor, it's likely anyone who works for any unit of local, state or federal government anywhere in the United States would no longer have to pay unions anything.

They could choose to, but they wouldn’t have to.

Why just government workers? Because everything government does is political.

And, in political matters, free speech is paramount.

Chief Justice John Roberts asked the California solicitor general who argued against Friedrichs’ position, give an example of “non-political speech” that the union negotiates at the bargaining table.

The example David Frederick, a lawyer for unions involved in the case, gave was mileage reimbursement rates.

But Roberts countered that even that constitutes political speech because it deals with how tax dollars should be spent.

“Everything that is collectively bargained with the government is within the political sphere,” added Justice Antonin Scalia.

Most Americans would say it would be wrong to force a Democrat to fund the Republican Party or for a Republican to be compelled to give to the Democratic Party.

But for years, government has allowed another group of political players – labor unions – to be treated much differently.

Frederick said a ruling in favor of Friedrichs would create a class of “free riders” who benefit from union-negotiated wages and benefits but refuse to support the unions financially.

But Roberts found that contention silly.

“If employees have shown overwhelmingly they want collective bargaining, it seems to me the ‘free rider’ problem is insignificant,” he said.

Justice Anthony Kennedy said the issue is one of “compelled riders” not “free riders.”

“The union is basically making these teachers compelled riders on issues which they strongly disagree,” he said.

For Friedrichs – and most Americans – that situation just seems wrong.

And if the questions asked by the Supreme Court justices this month are any indication, most of them think so, too.

Scott Reeder is a veteran statehouse reporter and a journalist with Illinois News Network, a project of the Illinois Policy Institute. He can be reached at [email protected]. Readers can subscribe to his free political newsletter by going to ILNEWS.ORG or follow his work on Twitter @scottreeder

By Illinois ReviewIn a Facebook post on Tuesday, former...
Previous article
Devall: It’s about who Ben Carson is not
Next article
Ford looks to Mexico for future hybrid production after Obama signs latest trade deal