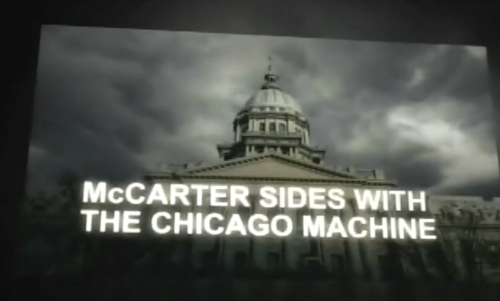 LEBANON – Despite claims being made by 20 year Congressman John Shimkus in a new campaign ad attacking Senator Kyle McCarter, the 15th CD GOP primary challenger says Shimkus is not telling the truth.

While January polling showed Shimkus way ahead of McCarter, Shimkus must see a need to try to dub McCarter "a Washington insider" that sides with the "Chicago Machine." The ad also accuses McCarter of supporting ObamaCare and Planned Parenthood.

“I never voted for or voiced support for Obamacare and I never supported Planned Parenthood funding,” McCarter said in a statement. “The healthcare resolution to Congress and the President asked them to address the healthcare issue. There was still ongoing national debate at the time and Obamacare was still two years away from taking effect."

McCarter said Shimkus' ad is misleading. He says the budget bill was a general appropriation for Human Services and had nothing to do with independent agency decisions on contracts for the abortion provider or any other provider, despite Shimkus' ad assertions.

"Congressman Shimkus voted to increase funding for Planned Parenthood to $543 million last November. Now Shimkus is trying to blow smoke over the eyes of voters for this awful sellout of pro-life by slandering Senator McCarter," Caprio said. "Shimkus needs to be voted out of office on March 15th."

"Kyle McCarter is one of the strongest defenders of Life in the Illinois Senate. He’s actually filed legislation to stop all state funding for Planned Parenthood and to investigate the group about allegations involving the sale of aborted baby body parts. The Shimkus TV ad is a gross distortion of Senator McCarter’s real record,” said Behnke, who is also chairman of IL Federation for Right to Life PAC.

As did other family and prolife leaders, as well as Illinois Tea Party's Denise Cattoni.

“Kyle McCarter is a proven defender of Family, Faith and Freedom. We know who he is. He is pro-life without exception, has defended traditional marriage and fought against big and bloated government, such as is represented by the disastrous Obamacare plan. Kyle has never wavered from conservative principles since first coming to the State Senate in 2009,” said Dave Smith, Executive Director of the Illinois Family Institute.

"Senator McCarter’s time in the Illinois Senate exemplifies the core conservative principles of the TEA Party movement, a citizen-driven movement for Freedom and Liberty that stands for fiscal responsibility, limited government, and free markets. Kyle is faithful to the traditional values that built this great nation. As someone that appreciates and respects his leadership and values, he has my full support in his candidacy for Congress", said Denise Cattoni, Founder of Illinois TEA Party; Illinois State Co-Coordinator for TEA Party Patriots.

McCarter said Shimkus is why the state needs term limits.

“The Shimkus deception about my record is an example of why we need term limits,” McCarter said. "Entrenched politicians can’t let go and they use the power of their office to avoid being held accountable by the people they claim to represent. From the beginning of the campaign, I was pressured by the friends and allies of my opponent not to run or to step aside. Now, because I am fighting to bring about real reform in Washington, my opponent resorts to a desperate last-ditch attempt to assault my character and insult the intelligence of the people of the 15th Congressional District.”