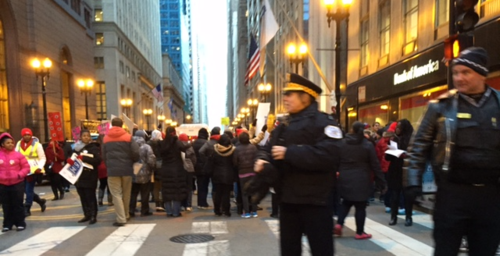 Last Thursday night during the evening rush hour, several thousand members of the Chicago Teachers Union shut down multiple city streets with a huge march and rally. The teachers have rejected a contract proposal resulting in this show of union solidarity.

The Chicago Police reported 16 arrests, primarily at a Bank of America downtown branch. The people arrested had participated in a "sit in," refusing to leave, resulting in trespassing charges. The union is accusing the bank of overcharging and profiting from business with the school district. 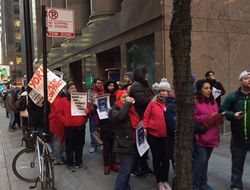 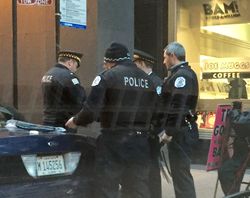 Police prepare plastic handcuffs for trespassers at Bank of America

This was the fourth downtown march, protest, and rally I have covered and photographed in the past few weeks. On Christmas Eve, I followed the protest that shutdown Michigan Avenue associated with the Laquan McDonald police shooting. A couple of weeks before that,  a similar group including the "Black Lives Matter" group was marching in front the archbishop''s house, resulting in multiple street closures.

Two weeks ago, I walked in the "March for Life" downtown with over 6000 pro-life advocates resulting in street closures. That was a little different than the others, as no arrests were made and it was more of a parade then a protest.

The teachers' march Thursday night appeared peaceful, yet very disruptive for pedestrian and car traffic. It also resulted in police and city resources being dedicated to crowded control. I did witness many people marching with families, small children, and many strollers. The temperature was around 32 degrees with other media reports saying it lasted for hours. Chicago seems to at a tipping point as the city's money is running out. DNA Info, along with a couple other sources, is reporting that the Chicago Public Schools have 6000 less students then just a year ago – a result of charter schools and people moving out of the city. CPS probably should have closed a dozen schools just on the drop of enrollment alone, but it appears little change was made. This trend of declining enrollment has been seen for years, even in my area at New Trier High School in Winnetka – which just took passed an $89 million tax increase to build more classrooms. The point is Chicago is not the only district with spending and borrowing problems.

Taxpayers and watch dogs are very concerned about the spending in CPS, which is about 80% teacher compensation. Many citizens feel the teachers will have to work more for less money along with obtaining better results.  Waste, fraud, mismanagement, and corruption are a concern as seen with the SUPES scandal resulting in the firing and indictment of the school superintendent Barbara Byrd Bennett. Over twenty million dollars disappeared in a questionable contract. There has been little media coverage since the summer. I wrote about this back in July HERE.

There is talk of state takeovers of CPS, along with possible bankruptcies of the unsustainable pension systems. The takeover could also void many of the labor agreements and contracts. Little is said about concerns of the residents, businesses, taxpayers, and students.

The teachers want more money and that's what the protest is all about. There simply is no more money. Where do we go from here?